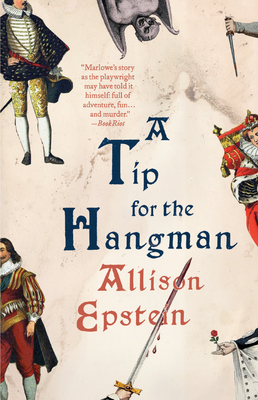 A Tip for the Hangman

An Elizabethan espionage thriller in which playwright Christopher Marlowe spies on Mary, Queen of Scots while navigating the perils of politics, theater, romance—and murder.

England, 1585. In Kit Marlowe's last year at Cambridge, he is approached by Queen Elizabeth's spymaster offering an unorthodox career opportunity: going undercover to intercept a Catholic plot to put Mary, Queen of Scots on Elizabeth's throne. Spying on Queen Mary turns out to be more than Kit bargained for, but his salary allows him to mount his first play, and over the following years he becomes the toast of London's raucous theater scene. But when Kit finds himself reluctantly drawn back into the world of espionage and treason, he realizes everything he's worked so hard to attain—including the trust of the man he loves—could vanish in an instant.

Praise For A Tip for the Hangman: A Novel…

“Marlowe’s story as the playwright may have told it himself: full of adventure, fun … and murder.” —BookRiot

“A clever concoction of genres, with a generous helping of historical fiction, espionage, class critique, and theatrical flair. . . Epstein vividly conjures up the world of Elizabethan theater . . . and adds on top a genuinely compelling spy story, creating an exuberant, irreverent romp.” —Crime Reads

“Epstein presents Marlowe as supremely capable, something of a trickster, a consummate liar, a fiendish lover—and someone capable of murder . . . The suspense is palpable. . . . Epstein breathes life into a celebrated figure.” —The New York Times Book Review

“This fizzy debut is a Tudor espionage tale, set among spies close to Mary, Queen of Scots. One of them is Christopher Marlowe, whose spy work bankrolls a rather promising theater career.” —The Chicago Tribune, 25 Books We Can’t Wait to Read in 2021

“Draws you into a morally convoluted world of spies, treason, politics, romance and murder. With a witty, captivating protagonist and fast-paced adventure, it’s the sort of book you should never pick up before bedtime lest you look out the window to see the sun rising. This is easily one of 2021’s best historical fiction books to date.” —The Michigan Daily

“Thrilling and romantic. . . . Epstein successfully evokes both the beauty and the brutality of 16th-century England.” —Historical Novel Society

ALLISON EPSTEIN earned her MFA in fiction from Northwestern University and a BA in creative writing and Renaissance literature from the University of Michigan. A Michigan native, she now lives in Chicago, where she works as a copywriter for clients in higher education and the arts. When not writing, she enjoys good theater, bad puns, and fancy jackets.  A Tip for the Hangman is her first novel.
Loading...
or support indie stores by buying on
(This book is on backorder)