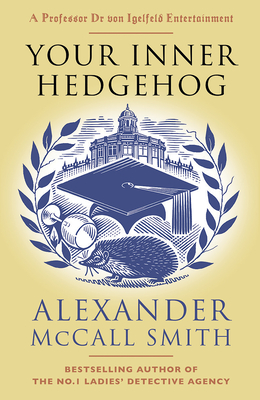 Welcome to the insane and rarified world of Professor Dr Dr Moritz-Maria von Igelfeld of the Institute of Romance Philology. Von Igelfeld is engaged in a never-ending quest to win the respect he feels certain he is due—a quest that has a tendency to go hilariously astray.

This time Professor Dr Dr von Igelfeld will have to take on a dangerous newcomer—Deputy Librarian Dr Hilda Schreiber-Ziegler. Swept in on a wave of progressive enthusiasm, she seems determined to drag the department into the modern age. At first this is a minor nuisance, but when Dr Schreiber-Ziegler attempts to remove twenty-one of the twenty-two copies of Professor Dr Dr von Igelfeld’s seminal work, the thousand-page Portuguese Irregular Verbs . . . Well, things have gone a bit too far. As a result, von Igelfeld mounts a campaign for the exalted position of director of the Institute against none other than the upstart Dr Schreiber-Ziegler herself. But the politicking will have to wait; von Igelfeld has been offered a visiting fellowship among the ivory towers of Oxford, where he will have to stave off an MI6 recruitment attempt and the effusive attention of a young American scholar. Still, von Igelfeld has always heeded the clarion call of duty, especially when it comes with a larger office.

“A comedic jewel… [At the Villa of Reduced Circumstances] attains a level of sublime nonsense reminiscent of Woody Allen’s Bananas.” —The New York Times

“In the halls of academe, a setting fraught with ego-driven battles for power and prestige [McCall Smith] has rendered yet another one-of-a-kind character: the bumbling but brilliant Dr. Mortiz-Maria von Igelfeld . . . . [a] deftly rendered trilogy [with] endearingly eccentric characters.” —Chicago Sun-Times

“Filled with comic characters, all academics of a particularly stripe. . . . McCall Smith has the same gift that John Mortimer has in making boring conversations hilarious—the atmosphere in the Institute of Romance Philology’s coffee room is very like the one-upmanship and backbiting in Horace Rumpole’s chambers. Academia can be a hoot, and this series proves it.” —Booklist

Alexander McCall Smith is the author of the No. 1 Ladies' Detective Agency novels and of a number of other series and stand-alone books. His works have been translated into more than forty languages and have been bestsellers throughout the world. He lives in Scotland.
Loading...
or support indie stores by buying on