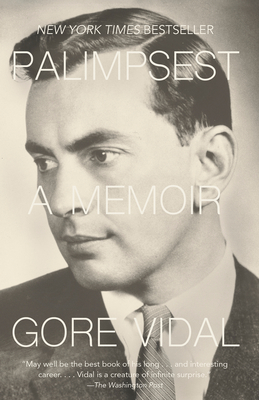 Vidal on Vidal—a great and supremely entertaining writer on a great and endlessly fascinating subject. Chosen by the New York Times as No. 7 among the best American memoirs of the past fifty years.

Palimpsest is Gore Vidal's account of the first thirty-nine years of his life as a novelist, dramatist, critic, political activist and candidate, screenwriter, television commentator, controversialist, and a man who knew pretty much everybody worth knowing, friend and enemy (and lover) alike. Here, recalled with the charm and razor wit of one of the great raconteurs of our time, are his birth into a DC political clan; his school days; his service in World War II; his emergence as a literary wunderkind in New York; his time in Hollywood, London, Paris and Rome; his campaign for Congress (outpolling JFK in his district); and his legendary feuds with, among many others, Truman Capote and William F. Buckley. At the emotional heart of this book is his evocation of his first and greatest love, boyhood friend Jimmy Trimble, killed in battle on Iwo Jima. Martin Amis has called Palimpsest "a tremendous read, down and dirty from start to finish . . . a work of considerable artistry."

Gore Vidal (1925–2012) was born at the United States Military Academy at West Point. His first novel, Williwaw, written when he was 19 years old and serving in the army, appeared in the spring of 1946. He wrote 23 novels, five plays, many screenplays, short stories, well over 200 essays, and a memoir.
Loading...
or support indie stores by buying on