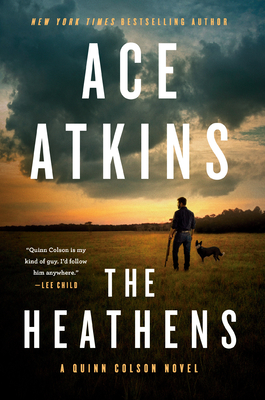 The Heathens (A Quinn Colson Novel #11)

Praise For The Heathens (A Quinn Colson Novel #11)…

"Exceptional. . . Atkins artfully alternates between that pursuit and Colson’s search for the people he believes slaughtered Byrd. The diverse cast of characters and their intricate relationships elevate this above most other gritty crime novels. Atkins is writing at the top of his game."−Publishers Weekly (starred)

"A rambunctious road novel. . . Evoking Edward Anderson's 1937 country noir Thieves like Us, with a touch of Bonnie and Clyde, Atkins' hard-edged yet tenderhearted novel will keep readers rooting for TJ and her gang of inadvertent outlaws on the road to the better lives they crave.”−Booklist (starred review)

“The Heathens may put one in the mind of The Adventures of Tom Sawyer in all of the best ways... Atkins’ straightforward plotting and well-turned prose will keep you in your seat reading...”−BookReporter.com

Ace Atkins is the author of twenty-eight books, including eleven Quinn Colson novels, the first two of which, The Ranger and The Lost Ones, were nominated for the Edgar Award for Best Novel (he has a third Edgar nomination for his short story "Last Fair Deal Gone Down"). He is the author of nine New York Times-bestselling novels in the continuation of Robert B. Parker's Spenser series. Before turning to fiction, he was a correspondent for the St. Petersburg Times and a crime reporter for the Tampa Tribune, and he played defensive end for Auburn University football.
Loading...
or support indie stores by buying on