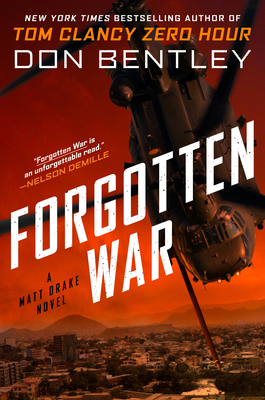 A brotherhood born in battle is endangered by a deadly secret in the latest astonishing thriller from the New York Times bestselling author of Tom Clancy Zero Hour and Hostile Intent.

As a team, Matt Drake and his partner, Frodo, have watched each other's backs through some very dark days. But one thing they've never doubted was their commitment to each other...until now.

Frodo has been accused of a war crime ten years after leaving Afghanistan. Matt is determined to prove his friend innocent, but what will he do when he finds that his closest friend has secrets he won't share?

“Don Bentley does it again and does it well with Forgotten War, his fourth Matt Drake novel that ripsaws between war and peace and everything in between. Bentley, an Afghanistan vet, Apache pilot, and former FBI agent brings all this to the table for a word feast that few writers can match. There’s a lot going on in this fast-paced and well-plotted tale, and the bonus is the sharply drawn characters who you may—or may not—want to meet in a bar or on the battlefield. Forgotten War is an unforgettable read.”
—Nelson DeMille, #1 New York Times bestselling author of The Maze

“An addictive, high octane thrill ride. With his trademark combination of loyalty, lethality, and sardonic wit, Matt Drake is a hero with soul...This is the kind of inspired adventure you stay up all night reading.”
—Tosca Lee, New York Times Bestselling author of The Line Between

"Don Bentley's Without Sanction is seriously one of the most compelling debuts in recent memory. Brilliantly crafted and written, this book is a thoroughly riveting read, and Don Bentley is an exciting new voice in the thriller world."
—Mark Greaney, #1 New York Times bestselling author of Mission Critical

"You can smell the cordite, hear the explosions, and feel the fight in this one. Action jumps from every page, thanks to an engaging premise and crosscutting suspense. Way ahead of the pack."
—Steve Berry, New York Times bestselling author of The Malta Exchange

"Without Sanction is a relentless, crackling debut about the fight against terrorism, its unacknowledged costs, and the price paid by its operatives. Don Bentley has lived this life, and he writes with deep authenticity, a serious swagger, wry wit, and a lyrical heart. This is one hell of a book."
—Nick Petrie, national bestselling author of Tear It Down

Don Bentley is the New York Times bestselling author of Tom Clancy Target Acquired and the Matt Drake series (Without Sanction and The Outside Man). Don is a former FBI special agent, SWAT team member, and Army Apache helicopter pilot. Learn more at www.donbentleybooks.com
Loading...
or support indie stores by buying on