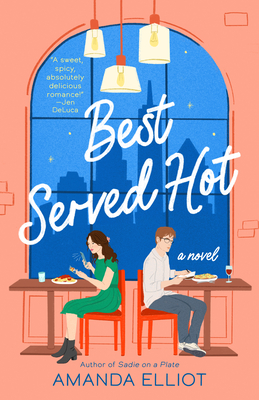 Two restaurant critics learn their opposing tastes might make for a five-star relationship in the next foodie romantic comedy from the author of Sadie on a Plate.

By day, Julie Zimmerman works as an executive assistant. After hours, she’s @JulieZeeEatsNYC, a social media restaurant reviewer with over fifty thousand followers. As much as she loves her self-employed side gig, what Julie really wants is to be a critic at a major newspaper, like the New York Scroll. The only thing worse than the Scroll’s rejection of her application is the fact that smarmy, social-media-averse society boy Bennett Richard Macalester Wright snagged her dream job.

While at the Central Park Food Festival, Julie confronts the annoyingly handsome Bennett about his outdated opinions on social media and posts the resulting video footage. Julie's follower count soars—and so does the Scroll’s. Julie and Bennett grudgingly agree to partner up for a few reviews to further their buzz. Online buzz, obviously.

Over tapas, burgers, and more, Julie and Bennett connect over their shared love of food. But when the competitive fire between them turns extra spicy, they'll have to decide how much heat their relationship can take.

Amanda Elliot lives with her husband in New York City, where she collects way too many cookbooks for her tiny kitchen, runs in Central Park, and writes for teens and kids under the name Amanda Panitch.
Loading...
or support indie stores by buying on