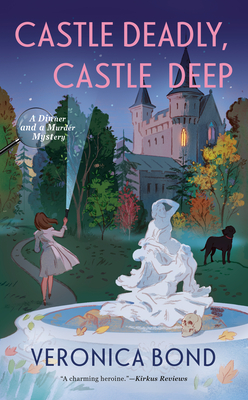 Castle Deadly, Castle Deep (A Dinner and a Murder Mystery #2)

After a man dies during a performance at Castle Dark, Nora Blake learns just how hard it is to catch a killer, especially if every suspect is a trained actor, in this exciting new Dinner and a Murder Mystery.

Autumn has arrived at Castle Dark, and Nora Blake has settled into her role as an actor in Derek Corby’s castle murder-mystery troupe. She is troubled, however, by the setting of Derek’s fall mystery: the catacombs in the depths of the castle. Yes, these catacombs are part of a set, the skeletons and cobwebs mere props, but Nora feels uneasy in the shadowy passages beneath Castle Dark. When a man is killed during one of their first shows, the eerie catacombs become a place of terror.

Joined by her castle companions, Nora attempts to find the motive for killing a seemingly innocent victim. Some of those answers appear to lie with the local community theater, the members of which Nora has come to know because she has joined Derek’s latest town production. As Nora practices her lines at Wood Glen’s Blue Curtain Theater, she realizes that everyone around her is an actor, and all of her suspects are perfectly capable of convincing others of their innocence. Nora soon discovers that someone else is in danger and that she may also be in the sights of the killer. With the help of her handsome boyfriend, Detective John Dashiell, Nora will have to go off-script to prevent a murderous encore. . . .

Praise For Castle Deadly, Castle Deep (A Dinner and a Murder Mystery #2)…

Praise for Death in Castle Dark

“An absolute treat! Veronica Bond has crafted a moody and mysterious traditional mystery that grabs onto the reader and won’t let go. I devoured every single page!”—New York Times bestselling author Jenn McKinlay

Veronica Bond is the pseudonym of a beloved author who has taught high school English for twenty-nine years.
Loading...
or support indie stores by buying on