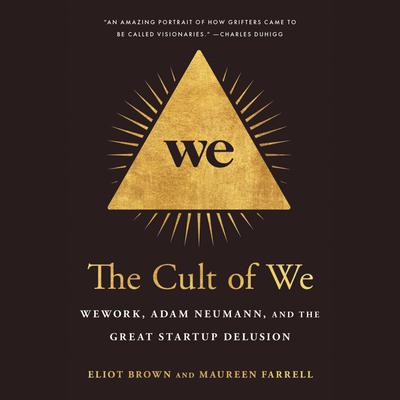 The Cult of We (Digital Audiobook)

WALL STREET JOURNAL BESTSELLER • A FINANCIAL TIMES, FORTUNE, AND NPR BEST BOOK OF THE YEAR • “The riveting, definitive account of WeWork, one of the wildest business stories of our time.”—Matt Levine, Money Stuff columnist, Bloomberg Opinion

The inside story of WeWork, its audacious founder, and what its epic unraveling says about a financial system drunk on the elixir of Silicon Valley innovation—from the Wall Street Journal correspondents (featured in the WeWork Hulu documentary) whose scoop-filled reporting hastened the company’s downfall.

WeWork would be worth $10 trillion, more than any other company in the world. It wasn’t just an office space provider. It was a tech company—an AI startup, even. Its WeGrow schools and WeLive residences would revolutionize education and housing. One day, mused founder Adam Neumann, a Middle East peace accord would be signed in a WeWork. The company might help colonize Mars. And Neumann would become the world’s first trillionaire.

This was the vision of Neumann and his primary cheerleader, SoftBank’s Masayoshi Son. In hindsight, their ambition for the company, whose primary business was subletting desks in slickly designed offices, seems like madness. Why did so many intelligent people—from venture capitalists to Wall Street elite—fall for the hype? And how did WeWork go so wrong?

In little more than a decade, Neumann transformed himself from a struggling baby clothes salesman into the charismatic, hard-partying CEO of a company worth $47 billion—on paper. With his long hair and feel-good mantras, the six-foot-five Israeli transplant looked the part of a messianic truth teller. Investors swooned, and billions poured in.

Neumann dined with the CEOs of JPMorgan and Goldman Sachs, entertaining a parade of power brokers desperate to get a slice of what he was selling: the country’s most valuable startup, a once-in-a-lifetime opportunity and a generation-defining moment.

Soon, however, WeWork was burning through cash faster than Neumann could bring it in. From his private jet, sometimes clouded with marijuana smoke, he scoured the globe for more capital. Then, as WeWork readied a Hail Mary IPO, it all fell apart. Nearly $40 billion of value vaporized in one of corporate America’s most spectacular meltdowns.

Peppered with eye-popping, never-before-reported details, The Cult of We is the gripping story of careless and often absurd people—and the financial system they have made.

Eliot Brown covers startups and venture capital for The Wall Street Journal. He joined the Journal in 2010, when he was hired to cover commercial real estate in the wake of the financial crisis. He previously worked at the New York Observer, where he covered economic development and local politics, and is a graduate of Macalester College in St. Paul, Minnesota.

Maureen Farrell has been a reporter at The Wall Street Journal since 2013. A recipient of the Newswomen's Club of New York's Nellie Bly Award, Farrell previously worked at Forbes, Debtwire, and Mergermarket, where she covered deals, bankruptcy, and startups. She is a graduate of Duke University and the Columbia University Graduate School of Journalism and is based in New York.