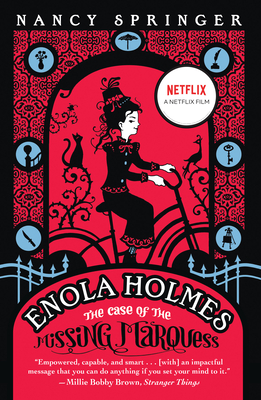 The Case of the Missing Marquess (An Enola Holmes Mystery #1)

When Enola Holmes, sister to the detective Sherlock Holmes, discovers her mother has disappeared, she quickly embarks on a journey to London in search of her. But nothing can prepare her for what awaits. Because when she arrives, she finds herself involved in the kidnapping of a young marquess, fleeing murderous villains, and trying to elude her shrewd older brothers—all while attempting to piece together clues to her mother’s strange disappearance. Amid all the mayhem, will Enola be able to decode the necessary clues and find her mother?

Praise for Enola Holmes: The Case of the Missing Marquess:

* “This is a terrific package. Springer not only provides two fine mysteries, breathtaking adventure, and key-eyed description, but she also offers a worthy heroine.” —Booklist, starred review

* “A tasty appetizer, with every sign of further courses to come.”—Kirkus Reviews, starred review