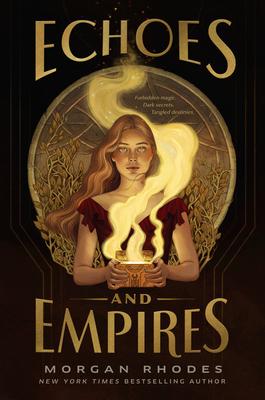 From the New York Times bestselling author of the Falling Kingdoms series comes the first book in a brand-new duology about forbidden magic and dangerous secrets, for readers of Victoria Aveyard and Margaret Rogerson.

So when she’s caught up in a robbery gone wrong at the Queen’s Gala and infected by a dangerous piece of magic—one that allows her to step into the memories of an infamously evil warlock—she finds herself living her worst nightmare. Joss needs the magic removed before it corrupts her soul and kills her. But in Ironport, the cost of doing magic is death, and seeking help might mean scheduling her own execution. There’s nobody she can trust.

Nobody, that is, except wanted criminal Jericho Nox, who offers her a deal: his help extracting the magic in exchange for the magic itself. And though she’s not thrilled to be working with a thief, especially one as infuriating (and infuriatingly handsome) as Jericho, Joss is desperate enough to accept.

But Jericho is nothing like Joss expects. The closer she grows to Jericho and the more she sees of the world outside her pampered life in the city, the more Joss begins to question the beliefs she’s always taken for granted—beliefs about right and wrong, about power and magic, and even about herself.

In an empire built on lies, the truth may be her greatest weapon.

Praise For Echoes and Empires…

“The witty banter and the enemies-to-lovers dynamic between Josslyn and Jericho are undeniably charming. Magic, romance, and politics combine in an oh-so-fun, fast-paced fantasy.” –Kirkus Reviews

“Morgan Rhodes is back with another heart-pounding fantasy adventure that delivers all you’ve come to love and expect from her: dark magic, witty dialogue, plus a feisty heroine and a dangerous bad boy you cannot help but root for.” —Nicki Pau Preto, author of the Crown of Feathers trilogy

“Echoes and Empires draws you in from page one with forbidden magic, an irrepressible heroine bent on discovering the truth, and a motley collection of characters who will keep you guessing. I need the sequel immediately!” –Elly Blake, New York Times bestselling author of Frostblood

Morgan Rhodes is the New York Times bestselling author of the Falling Kingdoms series. She loves to write about the epic adventures of quirky, interesting characters who inhabit her imagination. A former graphic designer drawn to sparkly objects and fancy handbags, Morgan lives in Ontario, Canada, where she maintains a very healthy belief in all things magical. Find her on Twitter and Instagram @MorganRhodesYA.
Loading...
or support indie stores by buying on