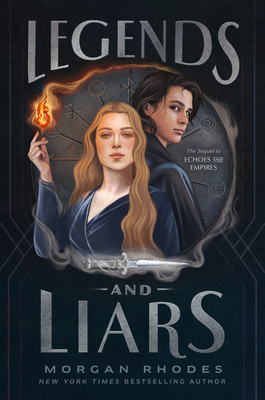 This riveting sequel to Echoes and Empires sees Joss and Jericho team up with some of their greatest enemies—including two of the most powerful mages in the world—to bring an end to the queen’s empire of lies, from New York Times bestselling author Morgan Rhodes.

Josslyn Drake is in over her head—again. After fleeing the Queen’s palace with Prince Elian in tow, she’d hoped to finally find a way to solve both of their magical problems in one fell swoop, with the help of criminal-turned-ally Jericho Nox. But Valery, Jericho’s boss—and a notoriously powerful mage—has other plans.

It soon becomes clear that Valery can’t, or won’t, provide assistance. And with her relationship with Jericho more confusing than ever, Joss realizes that she’ll have to find her own way out of this magical mess, with or without help from those around her.

Amid high tensions, Joss sets out to learn to control the memory magic—along with her own natural powers. As the struggle between Lord Banyon and the Queen threatens the people Joss cares about, she stumbles onto hints of a monumental royal secret. Her unwanted power just might hold the answers she needs to solve all her problems—but she’ll have to work quickly, because the fate of an empire hangs in the balance.

Morgan Rhodes is the New York Times bestselling author of the Falling Kingdoms series. She loves to write about the epic adventures of quirky, interesting characters who inhabit her imagination. A former graphic designer drawn to sparkly objects and fancy handbags, Morgan lives in Ontario, Canada, where she maintains a very healthy belief in all things magical. Follow her on Twitter and Instagram @MorganRhodesYA.
Loading...
or support indie stores by buying on