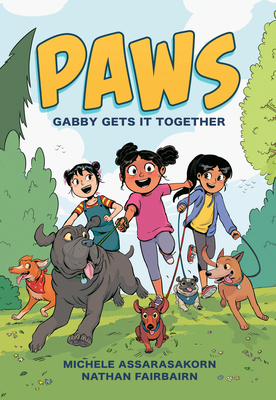 Gabby Gets It Together

Are you a fan of Raina Telgemeier or Shannon Hale? Then don’t miss PAWS, a new graphic novel series about best friends, cute dogs, and all the fun (and trouble) that comes with them. Perfect for fans of Real Friends, Roller Girl, and Allergic, this funny and heartwarming series is the Baby-Sitters Club for pets!

Meet best friends Gabby Jordan, Priya Gupta, and Mindy Park. They’re different in just about every way—personalities, hobbies, family, and more—but they have a few important things in common: they’re all in the same class, they absolutely love animals, and for reasons that are as varied as the trio themselves none of them can actually have any pets.

Unable to resist the adorable temptation any longer, the girls decide to come up with a way to finally get their hands on some furry friends. And, as luck would have it, it seems like their neighborhood is in need of some afterschool dog-walkers. So, just like that, PAWS is born!

But it turns out that running a business is harder than it looks, especially with three co-owners who are such different people. The girls soon argue about everything, from how to prioritize their commitments to the best way to keep their doggy clients happy. And when their fighting ultimately leads to a doggo crisis, will it tear their business and friendship apart or will they be able to get it together to save the day?

Praise For PAWS: Gabby Gets It Together…

Praise for the PAWS series:

★ "Reminiscent of Ann M. Martin’s The Baby-Sitters Club, this series starter will be a surefire hit with Raina Telgemeier fans and any reader seeking a solid friendship story. Laugh-out-loud funny and full of heart." —School Library Journal, starred review

★ "Wholly relatable, perfectly capturing the angst and turmoil of transition. Much like Ann M. Martin’s Baby Sitters Club, this series is poised to feature a different PAWS member in each volume; expect appeal to be similarly high. An honest, heartwarming look at friendship." —Kirkus Reviews, starred review

"The story is refreshingly inclusive in its depiction of its distinctive characters and their families, offering a reflection of the world that many readers will find familiar. With expressive faces and body language, the artwork poignantly emphasizes the ups and downs of the girls' experiences. This truly heartwarming story about friendship (and lots and lots of dogs) is a great choice for fans of Raina Telgemeier and Shannon Hale." —Booklist

"It's fantastic, it's cute, it's drawn and colored gorgeously, and I think it's going to win a lot of fans. PAWS is here to stay!" —Bryan Lee O’Malley, #1 New York Times bestseller and Eisner award-winning creator of the Scott Pilgrim series

"PAWS is an adorable graphic novel filled with bubbly, beautiful artwork, sharp writing, heart and humor. It's the comic I wish I'd had when I was an animal-loving kid!” —Faith Erin Hicks, New York Times bestseller and Eisner award-winning creator of the Nameless City series

"What's a bigger, tougher balance of fun and responsibility than animals? Friends, maybe. And I was really rooting for the three girls from PAWS as they struggled to navigate both. I liked this book a lot!" —Dana Simpson, New York Times bestselling creator of the Phoebe and Her Unicorn series

"I love this story. Funny, aspirational, and heartfelt, I was hooked from page one and enjoyed every wonderfully illustrated panel!"—Kris Pearn, director and executive producer of The Willoughbys

“A really beautiful and engaging story. The best thing I can say about PAWS is that my daughter likes it better than anything I've ever done, and I'm not arguing the point.” —Karl Kerschl, Eisner award-winning creator

Nathan Fairbairn is a New York Times bestselling and Eisner-nominated creator, who has worked as a colorist for such iconic characters as Spider-Man, Batman, Wonder Woman, and Scott Pilgrim. He’s also co-creator, writer, and colorist of the graphic novel Lake of Fire. He started writing PAWS, his middie grade debut, as a way to share his passion for comics and storytelling with his daughter. Nathan lives with his family in Vancouver. You can follow him on Twitter and Instagram (@NathanFairbairn) and see more of his work at nathanfairbairn.com.

Michele Assarasakorn (also known as MSASSYK) is colorist who worked on comic series such as Eisner-nominated Isola, Gotham Academy, and The Magnificent Ms. Marvel. Originally from Bangkok, Thailand, Michele now calls Vancouver home but also likes to travel the world working remotely as an artist. PAWS marks her debut as an illustrator. You can follow her on Twitter and Instagram (@Msassyk) and see more of her work at msassyk.com.
Loading...
or support indie stores by buying on