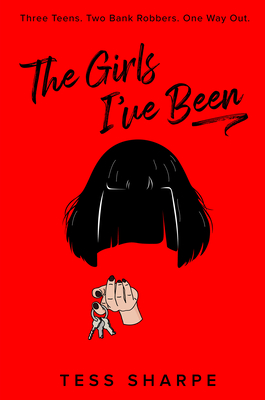 The Girls I've Been

Soon to be a Netflix film starring Millie Bobbie Brown! In this feminist, suspenseful thriller the daughter of a con artist is taken hostage in a bank heist—and will need to tap into all her skills in order to survive.

A BUSTLE, REFINERY29, COSMOPOLITAN, BUZZFEED and MARIE CLAIRE MOST ANTICIPATED BOOK of 2021


Nora O'Malley's been a lot of girls. As the daughter of a con-artist who targets criminal men, she grew up as her mother's protégé. But when her mom fell for the mark instead of conning him, Nora pulled the ultimate con: escape.

For five years Nora's been playing at normal. But she needs to dust off the skills she ditched because she has three problems:

#1: Her ex walked in on her with her girlfriend. Even though they're all friends, Wes didn't know about her and Iris.

#2: The morning after Wes finds them kissing, they all have to meet to deposit the fundraiser money they raised at the bank. It's a nightmare that goes from awkward to deadly, because:

#3: Right after they enter the bank, two guys start robbing it.

The bank robbers may be trouble, but Nora's something else entirely. They have no idea who they're really holding hostage . . .

Praise For The Girls I've Been…

A FORBES, BUZZFEED, BOOK RIOT AND KIRKUS BEST BOOK OF THE YEAR

A BUSTLE, REFINERY29, COSMOPOLITAN, BUZZFEED AND MARIE CLAIRE MOST ANTICIPATED BOOK OF 2021

A NEW YORK PUBLIC LIBRARY BEST BOOK OF THE YEAR

A COSMOPOLITAN 100 BEST YA BOOKS EVERYONE SHOULD READ, REGARDLESS OF THEIR AGE

AN ALA RISE: FEMINIST BOOK PROJECT AND ALA RAINBOW BOOK LIST SELECTION

★ "Not since Veronica Mars have hardscrabble swagger, enormous grief and teenage noir been combined into such a satisfying piece of storytelling. The Girls I've Been is a heart-wrenching, perfectly paced, cinematic thriller . . . a romance, a tragedy and a story about reclaiming agency and power. It is a triumph." —Bookpage, starred review

"YA thriller fans, The Girls I've Been is the perfect read for you." —BuzzFeed

"This action-packed story sizzles with suspense . . . In this thriller, characters prove that they can rely on their strength, friendship, and desire to be the confident and caring people they know themselves to be." —School Library Journal

"Sharpe (Barbed Wire Heart) focuses as much on [Nora's] trauma—and the systems of power that enable and excuse abuse—as on mystery and heart-pounding action . . . the small, complex cast of characters and emotional core make this a poignant thriller." --Publishers Weekly

"The tension is absolutely nailbiting." —The Bulletin of the Center for Children's Books

“A non-stop thrill ride… This book is so INTENSE. It jumps back and forth from the robbery in progress to Nora’s earlier life with her mother, a con woman married to a dangerous man. It’s so well done, extremely cinematic.” —Book Riot

“If you’re looking for a queer YA contemporary book with complex characters, loads of action to keep you reading WAY past your bedtime — and a story so well written I might have shed a tear over it — you need to read The Girls I’ve Been by Tess Sharpe. It will keep you captivated until the last page.” —Culturess

“Quick, full of plot twists and reveals that will have the reader on the edge of their seat . . . Strong female leads and well-written characters.” —Screen Rant

Born in a mountain cabin to a punk-rocker mother, Tess Sharpe grew up in rural California. She lives deep in the backwoods with a pack of dogs and a growing colony of formerly feral cats. She is an author and anthology editor, and has written several award-winning and critically acclaimed books for children, teens and adults.
Loading...
or support indie stores by buying on