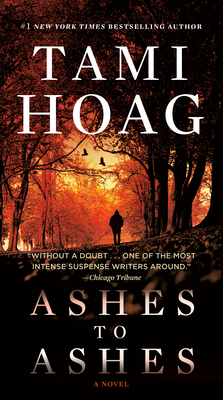 She writes the kind of thrillers that keep readers and critics awake all night.

She grabs you with a story as frightening as your worst fears, as chilling as your unspoken secrets.

She is New York Times bestselling writer Tami Hoag, today's most exciting master of suspense.  Ashes to Ashes is her most terrifying novel yet...read on...

Some killers are born.

For him, the question is irrelevant.  The taste for murder has always been present, prowling the edge of his consciousness like a hungry wolf.  In a wooded Minneapolis park, he performs his profane ceremony.  He arranges the body to his satisfaction.  He pours the accelerant, anointing the dead.  Then he lights the match.

The newspapers have dubbed him the Cremator.  He has already claimed three lives.  And he won't stop there.  He has a plan for greatness.  Only this time there is a witness.  A teenage runaway with a dubious identity and a murky past, Angie DiMarco has seen the face of the killer in the flickering light of the funeral pyre.  Now the police have Angie, but Angie isn't talking.

Enter Kate Conlan.  She knows all too well the dark side of the human heart.  Once an up-and-coming FBI agent, she left the Bureau under a cloud of scandal.  Now, instead of catching criminals, she helps their victims and protects witnesses.  The job of advocate suits her just fine--until she's assigned to Angie.

Not even Kate can tell if the troubled youth is a reluctant witness, a potential victim, or something more troubling still.  Her superiors are interested only in badgering Angie for a lead, because the Cremator's latest victim may be the daughter of Peter Bondurant--an enigmatic billionaire businessman with power to influence the way the case is handled.

Bondurant pulls strings and gets Special Agent John Quinn brought to the case.  The FBI's ace profiler of serial killers, Quinn shares a painful past with Kate and hides a secret that is driving him toward madness.  He is a man on a ragged edge, and yet his insatiable need to do justice drives him to catch the Cremator--no matter what the cost to himself.

Amid a frenzy of public hysteria, politics, and media attention, Kate is confronted with the most difficult role of her career--and her life.  For she is the one woman who has what it takes to stop the Cremator...and the one woman he wants next.

Praise For Ashes to Ashes: A Novel…

"Without a doubt...one of the most intense suspense writers around."
--Chicago Tribune

"[Tami Hoag] demonstrates just why she has become one of the hottest names in the suspense game....Bottom line: Leaves competition in the dust."
--People

"[A] detail-packed thriller...The Silence of the Lambs comes to mind more than once."
--Entertainment Weekly

"Tami Hoag is the queen of the crime story."
--New York Post

"You'll want to lock the doors while you're reading."
--Star Tribune, Minneapolis

"An up-all-night read."
--The Detroit News

Tami Hoag's novels have appeared regularly on national bestseller lists since the publication of her first book in 1988. She lives in Virginia with her husband and a menagerie of pets.
Loading...
or support indie stores by buying on