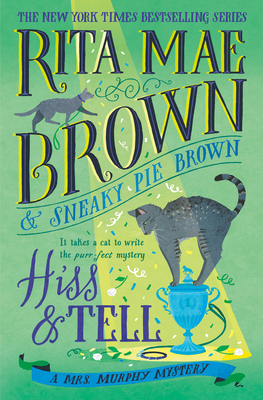 When a series of mysterious deaths spoil the Christmas season in Crozet, Virginia, Mary Minor “Harry” Harristeen and her beloved cats and dogs lend the police a helping paw in this exciting holiday mystery from Rita Mae Brown and her feline co-author Sneaky Pie Brown.

Christmas is coming and Harry’s to-do list is a mile long. The days are filled with delivering holiday baskets to neighbors in need, chopping down the perfect tree with her best friend, Susan Tucker, and hunting for that elusive special gift for her beloved husband, Pharamond “Fair” Harristeen. Harry also decides to try her hand at dog showing, enrolling her handsome Irish Wolfhound puppy Pirate in classes to prepare for a future exhibition. Through it all, holiday cheer—and plenty of treats for Pirate—keep spirits high.

But the holidays aren’t cheerful for everyone. Harry’s friend on the police force, Cynthia Cooper, warns that the season can bring an uptick in crime. Her words prove tragically prescient when Harry and Susan discover the body of a man by the side of the road, dead, without any clues to his identity. One suspicious death is bad enough, but when Cooper reports that two more bodies have been found, also unidentified, Harry knows trouble is afoot. The autopsies for all three bodies reveal the presence of a deadly drug. Could their deaths have been accidental, or is a devious killer on the prowl?

With help from her feline sidekicks, Mrs. Murphy and Pewter, as well as Tee Tucker the corgi and Pirate, Harry vows to find the answers and stop the spate of deaths so that all of Crozet can have a very merry Christmas.

Rita Mae Brown is the bestselling author of the Sneaky Pie Brown mysteries; the Sister Jane series; the Runnymede novels, including Six of One and Cakewalk; A Nose for Justice and Murder Unleashed; Rubyfruit Jungle; and In Her Day; as well as many other books. An Emmy-nominated screenwriter and a poet, Brown lives in Afton, Virginia, and is a Master of Foxhounds and the huntsman.

Sneaky Pie Brown, a tiger cat born somewhere in Albemarle County, Virginia, was discovered by Rita Mae Brown at her local SPCA. They have collaborated on numerous Mrs. Murphy mysteries—in addition to Sneaky Pie’s Cookbook for Mystery Lovers and Sneaky Pie for President.
Loading...
or support indie stores by buying on