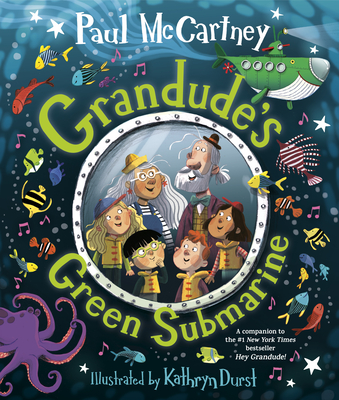 Celebrate the fun that grandparents and grandkids can get up to in this action-packed undersea adventure—a companion picture book to Paul McCartney’s #1 New York Times bestseller Hey Grandude.

Grandude’s inventions are the stuff of legend, and his new green submarine doesn’t disappoint. In fact, it flies as well as submerges! Grandude whisks the grandkids off on another adventure, but he and the Chillers soon find themselves in a pickle. Suddenly, it’s Nandude to the rescue! Nandude is an explorer as courageous as Grandude, with an amazing accordion-ship to boot! Between Grandude’s magic compass and Nandude’s magical music, everyone arrives home safely. But not before enjoying a parade, dancing rainforest animals, and a narrow escape from a grabby octopus. This tale is perfect for little explorers and Paul McCartney fans alike! Artist Kathryn Durst returns with glorious, humor-filled illustrations that are as beautiful as ever.

“A refreshing change from so many other celebrity titles…Comfy and cozy, with nary a meanie in sight.” —Kirkus Reviews

Since writing his first song at the age of fourteen, Paul McCartney’s career has been impossibly prolific and singularly influential. In the 1960s, Paul changed the world forever with The Beatles. He didn’t stop there, continuing to push boundaries as a solo artist, with Wings, and through collaborations with numerous world-renowned artists. He has received eighteen Grammys, and in 1997 was knighted by Her Majesty the Queen for his services to music. Paul’s most recent album, McCartney III, debuted at #1 on the Billboard charts in December 2020. Paul is a dedicated philanthropist, passionately advocating for many causes, including animal rights and environmental issues. He’s also a very proud grandfather.

Kathryn Durst is a graduate of Sheridan College in Ontario, Canada. With a background in animation, she has interned with Pixar Animation Studios, in addition to working with various children’s book publishers. When she is not illustrating books, she can be found playing the accordion, growing vegetables, folk dancing, or putting on shadow puppet shows. She lives in Toronto, Canada, with her grumpy mini dachshund named Chili Dog
Loading...
or support indie stores by buying on