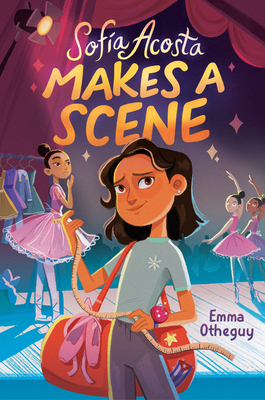 A poignant, coming of age story about a Cuban-American girl trying to figure out where she belongs--both in her ballet-loving family and the wider world. Perfect for fans of Front Desk and Merci Suárez Changes Gears.

It’s a good thing Sofía Acosta loves dreaming up costumes, because otherwise she’s a ballet disaster—unlike her parents, who danced under prima ballerina Alicia Alonso before immigrating to the suburbs of New York. Luckily, when the Acostas host their dancer friends from Cuba for a special performance with the American Ballet Theatre, Sofía learns there’s more than dance holding her family together. Between swapping stories about Cuba and sharing holiday celebrations, the Acostas have never been more of a team.
Then Sofía finds out about the dancers’ secret plans to defect to the United States, and makes a serious mistake—she confides in her best friend, only to discover that Tricia doesn't want "outsiders" moving to their community. Now Sofía wonders what the other neighbors in her tight-knit suburban town really think of immigrant families like hers. Sofía doesn’t want to make a scene, but if she doesn’t speak up, how will she figure out if her family really belongs?

"Extensive character development and masterful scene setting in the first half of the book pay off in a faster-paced second half that sees Sofía grow to understand issues surrounding immigration, race, class, and privilege more deeply. Readers will root for Sofía as she learns to use her voice to advocate for both herself and others. Bighearted, nuanced, and insightful."—Kirkus Reviews

"Centers an immigrant diasporic experience through the lens of a girl working to fit in, and struggling to square her privilege with experiences of intersectional discrimination."—Publishers Weekly

“Full of heart and characters that jump off the page. [This is] a unique and honest view into the experience of the Cuban diaspora in the United States from a young protagonist’s perspective. It made me care deeply about Sofía as she awakened to issues around her, such as gentrification, privilege, immigration, and history. Timely and necessary. –Yamile Saied Méndez, Pura Belpré-winning author of Furia

"From the very first page, I found myself  rooting for Sofía as she found her voice and made some good trouble along the way!" —Tami Charles, New York Times bestselling author of All Because You Matter and Like Vanessa

“A sensitive portrayal of a Cuban American girl's efforts to become a ballet dancer and an advocate for immigrants.” —Margarita Engle, Newbery Honor-winning author of The Surrender Tree

“A heartwarming novel about a girl finding her place. The themes of immigration and speaking up for what you believe in are skillfully woven into a story that feels timely and important, but no less entertaining and relatable. I loved watching Sofía grow and discover her strengths and know she will inspire many others.” –Hena Khan, author of Amina’s Voice and Amina’s Song

Emma Otheguy is the author of the middle-grade novel Silver Meadows Summer (Knopf, 2019) and the bilingual picture book Martí's Song for Freedom (Lee & Low, 2017) which received five starred reviews, was named a Best Book of the Year by Kirkus Reviews, School Library Journal, and the New York Public Library. She co-authored The Unicorn Rescue Society: The Madre de Aguas of Cuba with Adam Gidwitz (Dutton 2020), and her most recent publication is her contribution to the new Carmen Sandiego universe, Secrets of the Silver Lion (HMH 2020).

Emma holds a Ph.D. in History from New York University, where she focused on colonial Latin America, and graduated from Swarthmore College, sold books at an independent bookstore, and taught elementary-school Spanish. She lives in New York City with her family. Visit her online at emmaotheguy.com.
Loading...
or support indie stores by buying on