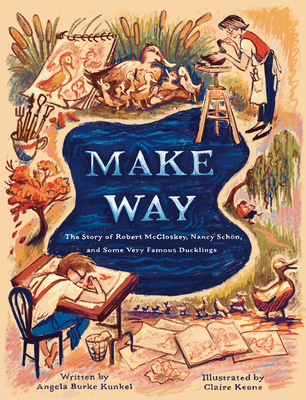 The Story of Robert McCloskey, Nancy Schön, and Some Very Famous Ducklings

In the beginning, there was a boy named Robert McCloskey, growing up in Ohio, his hands always moving, always creating. Many years later, after attending art school in Boston, he would reflect on his days wandering through Boston Garden and write the classic picture book  Make Way for Ducklings.

In the beginning, there was also a girl named Nancy Schön. She grew up in Newton, Massachusetts, working in her father's greenhouse, twisting wire and boughs into wreaths. Many years later, Nancy would look at Robert's drawings in Make Way for Ducklings and get the seed of an idea. That seed became the beloved bronze sculptures of Mrs. Mallard and her eight ducklings that stand in Boston Garden today.

This stunning and clever picture book biography intertwines the lives of two phenomenal artists--who were contemporaries and friends--and reveals the extraordinary impact they've had on generations of children.

Angela Burke Kunkel is the author of Digging for Words, an ALA Notable Book and Kirkus Best Book of the Year. It also received the Americas Award and the International Latino Book Award for best English language title. She is also the author of Penguin Journey, called "stunning" in a starred review from Kirkus Reviews.

Claire Keane is the author-illustrator of Little Big Girl and Once Upon a Cloud and the illustrator of Paolo, Emperor of Rome by Mac Barnett and Why? by Adam Rex, among others. She is also known for her development art for the movies Tangled and Frozen. She studied at École Supérieure d'Arts Graphiques in Paris and now lives in Venice Beach, California with her kids.
Loading...
or support indie stores by buying on