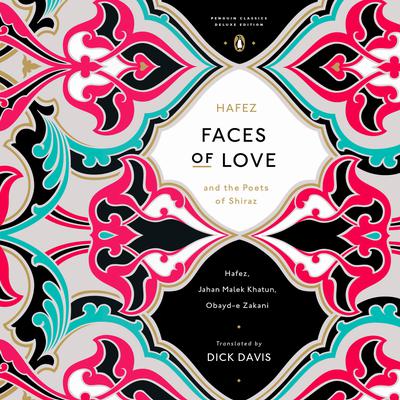 Hafez and the Poets of Shiraz

Together, Hafez, a giant of world literature; Jahan Malek Khatun, an eloquent princess; and Obayd-e Zakani, a dissolute satirist, represent one of the most remarkable literary flowerings of any era. All three lived in the famed city of Shiraz, a provincial capital of south-central Iran, and all three drew support from arts-loving rulers during a time better known for its violence than its creative brilliance. Here Dick Davis, an award-winning poet widely considered “our finest translator of Persian poetry” (The Times Literary Supplement), presents a diverse selection of some of the best poems by these world-renowned authors and shows us the spiritual and secular aspects of love, in varieties embracing every aspect of the human heart.

“Davis [is] widely acknowledged as the leading translator of Persian literature in our time…Faces of Love has made the Persian originals into real and moving English poems.” —Michael Dirda, The Washington Post


*This audiobook includes a downloadable PDF that contains notes from the book.
Loading...