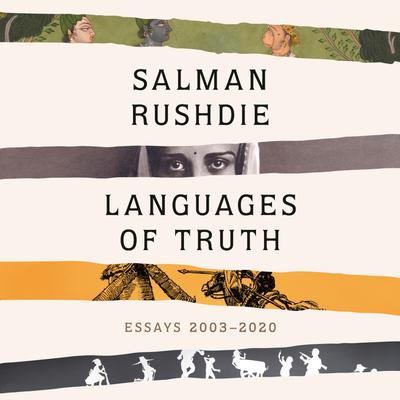 Salman Rushdie is celebrated as “a master of perpetual storytelling” (The New Yorker), illuminating truths about our society and culture through his gorgeous, often searing prose. Now, in his latest collection of nonfiction, he brings together insightful and inspiring essays, criticism, and speeches that focus on his relationship with the written word and solidify his place as one of the most original thinkers of our time.

Gathering pieces written between 2003 and 2020, Languages of Truth chronicles Rushdie’s intellectual engagement with a period of momentous cultural shifts. Immersing the reader in a wide variety of subjects, he delves into the nature of storytelling as a human need, and what emerges is, in myriad ways, a love letter to literature itself. Rushdie explores what the work of authors from Shakespeare and Cervantes to Samuel Beckett, Eudora Welty, and Toni Morrison mean to him, whether on the page or in person. He delves deep into the nature of “truth,” revels in the vibrant malleability of language and the creative lines that can join art and life, and looks anew at migration, multiculturalism, and censorship.

Enlivened on every page by Rushdie’s signature wit and dazzling voice, Languages of Truth offers the author’s most piercingly analytical views yet on the evolution of literature and culture even as he takes us on an exhilarating tour of his own exuberant and fearless imagination.

Salman Rushdie is the author of fourteen novels--Luka and the Fire of Life; Grimus; Midnight's Children (for which he won the Booker Prize and the Best of the Booker); Shame; The Satanic Verses; Haroun and the Sea of Stories; The Moor's Last Sigh; The Ground Beneath Her Feet; Fury; Shalimar the Clown; The Enchantress of Florence; Two Years, Eight Months, and Twenty-Eight Nights; The Golden House; and Quichotte--and one collection of short stories: East, West. He has also published four works of nonfiction--Joseph Anton; The Jaguar Smile; Imaginary Homelands; and Step Across This Line--and coedited two anthologies, Mirrorwork and Best American Short Stories 2008. He is a member of the American Academy of Arts and Letters and a Distinguished Writer in Residence at New York University. A former president of PEN American Center, Rushdie was knighted in 2007 for services to literature.