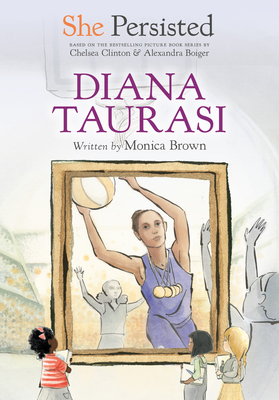 Inspired by the #1 New York Times bestseller She Persisted by Chelsea Clinton and Alexandra Boiger, a chapter book series about women who spoke up and rose up against the odds--including Diana Taurasi!

When Diana Taurasi was a girl, professional women's basketball didn't exist in the US. But she worked hard to create opportunities for herself, winning championships throughout college and eventually going on to play for the WNBA with the Phoenix Mercury and winning multiple Olympic gold medals.

In this chapter book biography by award-winning author Monica Brown, readers learn about the amazing life of Diana Taurasi--and how she persisted.

Complete with an introduction from Chelsea Clinton, black-and-white illustrations throughout, and a list of ways that readers can follow in Diana Taurasi's footsteps and make a difference! A perfect choice for kids who love learning and teachers who want to bring inspiring women into their curriculum.

And don’t miss out on the rest of the books in the She Persisted series, featuring so many more women who persisted, including Florence Griffith Joyner, Sonia Sotomayor, and more!

Dr. Monica Brown (she/her) is the award-winning author of many multicultural books for children, including Frida and her Animalitos, Sharuko: El arqueólogo peruano/Peruvian Archeologist Julio C. Tello, Waiting for the biblioburro/Esperando al Biblioburro, Marisol McDonald Doesn’t Match/Marisol McDonald no combina, and the Lola Levine chapter book series. Her books have garnered multiple starred reviews and awards, and have appeared in The New York Times, The Washington Post, and NPR's All Things Considered. Her new release, Small Room, Big Dreams: The Journey of Julian and Joaquín Castro, is her thirtieth book for children. She teaches at Northern Arizona University and lives in Flagstaff with her family. You can visit Monica online at monicabrown.net and follow her on Twitter @monicabrownbks.

Chelsea Clinton (she/her) is the #1 New York Times bestselling author of She Persisted, She Persisted Around the World, She Persisted in Sports, She Persisted in Science, Don't Let Them Disappear, It's Your World and Start Now!, as well as Grandma's Gardens and The Book of Gutsy Women, which she wrote with Hillary Clinton, and Governing Global Health with Devi Sridhar. Chelsea earned a master’s degree in public health from Columbia University’s Mailman School of Public Health, where she is now an adjunct assistant professor, and a PhD in international relations from Oxford University. She is also the Vice Chair of the Clinton Foundation, where she works on many initiatives, including those that help empower the next generation of leaders. She lives in New York City with her husband, Marc, their three children and their dog, Soren.

Gillian Flint (she/her) is an illustrator who has a passion for painting in watercolors. She has been drawing and creating characters for as long as she can remember. Her work has been published in the USA, the UK and Australia. In her spare time she enjoys reading and gardening at her home in the UK. You can visit Gillian online at gillianflint.com and follow her on Instagram @gillianflint_illustration.

Alexandra Boiger (she/her) has illustrated nearly twenty picture books, including the She Persisted series by by Chelsea Clinton; the popular Tallulah series by Marilyn Singer; and the Max and Marla books, which she also wrote. Originally from Munich, Germany, she now lives outside of San Francisco, California, with her husband, Andrea; daughter, Vanessa; and two cats, Luiso and Winter. You can visit Alexandra online at alexandraboiger.com and follow her on Instagram @alexandra_boiger.
Loading...
or support indie stores by buying on