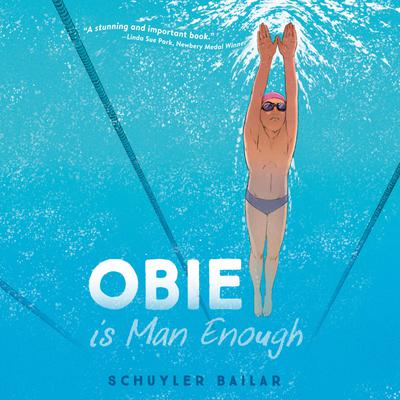 A coming-of-age story about transgender tween Obie, who didn't think being himself would cause such a splash. For fans of Alex Gino's George and Lisa Bunker's Felix Yz.

Obie knew his transition would have ripple effects. He has to leave his swim coach, his pool, and his best friends. But it’s time for Obie to find where he truly belongs.

As Obie dives into a new team, though, things are strange. Obie always felt at home in the water, but now he can’t get his old coach out of his head. Even worse are the bullies that wait in the locker room and on the pool deck. Luckily, Obie has family behind him. And maybe some new friends too, including Charlie, his first crush. Obie is ready to prove he can be one of the fastest boys in the water—to his coach, his critics, and his biggest competition: himself.

*Includes a downloadable PDF of the Glossary, Resources, and Further Reading from the end of the book

Schuyler Bailar is an internationally renowned inspirational speaker, inclusion advocate and diversity advisor. He holds a degree in Cognitive Neuroscience and Evolutionary Psychology from Harvard University where he was also the first transgender athlete to compete in any sport on an NCAA Division 1 men's team. By 15, he was one of the USA's top 15-year-old breast-strokers. By 17, he set a USA national age-group record. In college, he finished in the top 15% of all collegiate athletes in his event. Schuyler's difficult choice - to transition while potentially giving up the prospect of being a champion swimmer as a female - was historic and timely. His story appeared everywhere from 60 Minutes to The Ellen Show. Schuyler's tireless advocacy of inclusion through public speaking and social media (@pinkmantaray) has earned him numerous notable honors. His corporate clients include Microsoft, Qualcomm, Capital One, American Eagle, Monte Nido & Affiliates and many more.