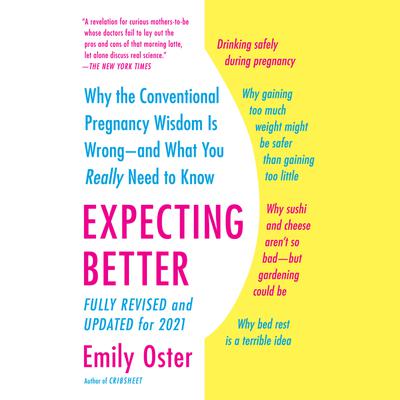 What to Expect When You're Expecting meets Freakonomics: an award-winning economist disproves standard recommendations about pregnancy to empower women while they're expecting. From the author of Cribsheet, a data-driven decision making guide to the early years of parenting

Pregnancy—unquestionably one of the most pro­found, meaningful experiences of adulthood—can reduce otherwise intelligent women to, well, babies. Pregnant women are told to avoid cold cuts, sushi, alcohol, and coffee without ever being told why these are forbidden. Rules for prenatal testing are similarly unexplained. Moms-to-be desperately want a resource that empowers them to make their own right choices.

When award-winning economist Emily Oster was a mom-to-be herself, she evaluated the data behind the accepted rules of pregnancy, and discovered that most are often misguided and some are just flat-out wrong. Debunking myths and explaining everything from the real effects of caffeine to the surprising dangers of gardening, Expecting Better is the book for every pregnant woman who wants to enjoy a healthy and relaxed pregnancy—and the occasional glass of wine.


* This audiobook includes a downloadable PDf of charts, graphs and an Appendix from the book.

Emily Oster is a professor of economics at Brown University and the author of Cribsheet:A Data-Driven Guide to Better, More Relaxed Parenting, from Birth to Preschool. She was a speaker at the 2007 TED conference and her work has been featured in The New York Times, The Wall Street Journal, Forbes,and Esquire. Oster is married to economist Jesse Shapiro and is also the daughter of two economists. She has two children.