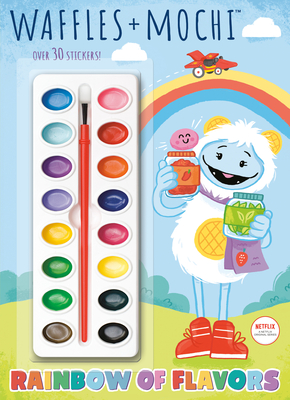 
Follow Waffles and Mochi around the world as they learn about herbs and spices. Girls and boys ages 3 to 7 will love this activity book, which is based on an episode of the new Netflix show about food and friendship. It features a paint tray, a brush, and over 30 stickers!

Join Waffles and Mochi for global adventures that reveal the stories behind our food. Produced by President Barack and Michelle Obama’s Higher Ground and streaming on Netflix, Waffles + Mochi is an entertaining mix of puppetry, animation, celebrity chefs, and famous guest stars. This delightful new show introduces young children and their families to a world of cooking and fearless eating.

Sarah Rebar is an illustrator based in sunny Los Angeles, California! She worked in kid's TV for Sesame Street as a character designer, drawing muppets for a decade. She likes weird comedy and cartoons and misses NYC pizza. Visit her on the web at sarahrebar.com.

Mike Jackson of MJ Illustrations started freelancing with all the major animation studios after graduating from the Art Center College of Design. He has worked successfully as an illustrator for over 25 years with a primary focus on children’s books and product package design. Currently located in Santa Fe, New Mexico, he enjoys doing both illustration as well as fine art in the beautiful environment of the great Southwest.
Loading...
or support indie stores by buying on