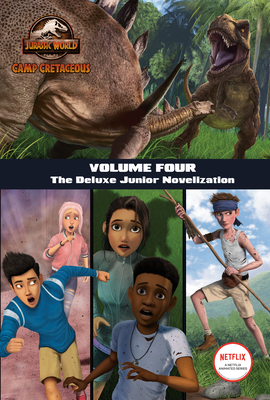 It's survival of the fittest as the kids at Camp Cretaceous face off against dangers and dinosaurs in this Deluxe Junior Novelization based on Jurassic World: Camp Cretaceous—the exciting Netflix animated series.
BONUS: Includes full-color insert and poster!

Jurassic World: Camp Cretaceous—the exciting hit animated series—follows a group of six teenagers chosen for a once-in-a-lifetime experience at an adventure camp on the opposite side of Isla Nublar, the home of the Jurassic World theme park. But when dinosaurs wreak havoc across the island, the campers are stranded and left to fend for themselves. This novelization ties into the action-packed stories of Jurassic World: Camp Cretaceous and features eight pages of full-color images and a poster!

Steve Behling is passionate about telling stories for kids. He has written books, comics, articles, puzzles, games, and more for a diverse clientele (including Disney, Marvel, Hasbro, Mattel, and DreamWorks, to name a few). As associate creative director for Marvel Entertainment and Comics Director/Executive Editor for Disney Publishing Worldwide, he has worked with incredible brands like Spider-Man, The Avengers, Phineas and Ferb and Disney/Pixar properties too numerous to name. Steve lives in a top-secret subterranean lair with his wife, two human children, and three-legged wonder beagle, Loomis.
Loading...
or support indie stores by buying on