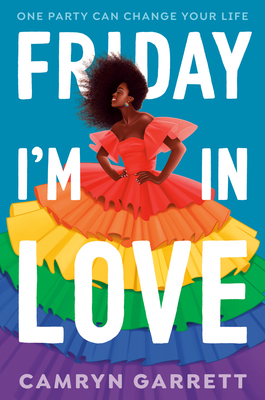 “Friday I’m In Love is for every adolescent, or adult, who is wondering where they fit and who they belong with. It deals with sexuality, class, and race in a humorous way while still giving these aspects of the story the respect they deserve.”
— Isabella Barbuto, Books Are Magic, Brooklyn, NY
View the List

It's too late for a Sweet Sixteen, but what if Mahalia had a coming-out party? A love letter to romantic comedies, sweet sixteen blowouts, Black joy, and queer pride.

“A perfect ode to romantic comedies, wrapped in a dazzling rainbow dress.” —Rachael Lippincott, #1 New York Times bestselling author of Five Feet Apart and She Gets the Girl

She wants a big Sweet Sixteen like her best friend, Naomi.
She wants the super-cute new girl Siobhan to like her back.
She wants a break from worrying—about money, snide remarks from white classmates, pitying looks from church ladies . . . all of it.

Then inspiration strikes: It’s too late for a Sweet Sixteen, but what if she had a coming-out party? A singing, dancing, rainbow-cake-eating celebration of queerness on her own terms.

The idea lights a fire beneath her, and soon Mahalia is scrimping and saving, taking on extra hours at her afterschool job, trying on dresses, and awkwardly flirting with Siobhan, all in preparation for the coming out of her dreams. But it’s not long before she’s buried in a mountain of bills, unfinished schoolwork, and enough drama to make her English lit teacher blush. With all the responsibility on her shoulders, will Mahalia’s party be over before it’s even begun?

A novel about finding yourself, falling in love, and celebrating what makes you you.

“Mahalia’s story lives, breathes and glows. I’m in love with it every day of the week!” —Becky Albertalli, #1 New York Times bestselling author of Simon vs. the Homosapiens Agenda


Praise For Friday I'm in Love…

“A perfect ode to romantic comedies, wrapped in a dazzling rainbow dress.” —Rachael Lippincott, #1 New York Times bestselling author of Five Feet Apart and She Gets the Girl

"This absorbing, appealing narrative is equal parts funny, romantic, and affirming. Romantic comedy that celebrates being yourself on your own terms." —Kirkus Reviews

"The love story that we deserve and the one that we need. Absolute perfection." —Mason Deaver, award-winning author of I Wish You All the Best

CAMRYN GARRETT grew up in New York and began her writing career at thirteen, when she was selected as a TIME for Kids reporter, interviewing celebrities like Warren Buffett and Kristen Bell. Since then, her writing has appeared on MTV and in HuffPost and Rookie magazine, and she was recently selected as one of Teen Vogue’s “21 Under 21: Girls Who Are Changing the World.” When she’s not writing, she studies film at NYU, and she’s a proud advocate for diverse stories and storytellers in any medium. Her first two novels, Full Disclosure and Off the Record, received rave reviews from outlets such as EW, Glamour, and SLJ, which said, in its starred review, “Readers will fall in love.” Friday I'm in Love is her third novel and first rom-com.
Loading...
or support indie stores by buying on