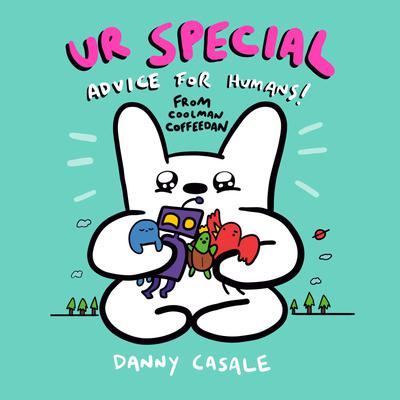 Advice for Humans from Coolman Coffeedan

Based on the wildly popular characters from Coolman Coffeedan, a colorful and charming collection of parables reminding us to face our fears, our anxieties, and our self-consciousness head-on.


What do a naked cat, a sad turtle, an armless robot, and a sentient potato have in common? Quite a lot, actually!

In this vibrant and heartfelt book, self-proclaimed bad animator Danny Casale delivers a much-needed jolt of positivity and humor to ease even the sourest of spirits. Fans of his Coolman Coffeedan accounts will recognize his relatable characters, but the material is entirely new. Each chapter introduces a new friend and a new hardship, offering the perfect pick-me-up for whatever has you down. Tackling topics from loneliness and self-confidence to the perfect (ONLY) way to construct a bowl of cereal, this book will leave you feeling just fine.

So don’t forget—no matter what you may be feeling on the inside, or what people may be saying on the outside, UR SPECIAL!

Danny Casale (aka Coolman Coffeedan) is an artist in NYC who has gained popularity through his surreal, humorous, and crudely-drawn animations for an audience of over 6 million followers. The self-titled "bad animator" first went viral in June of 2017 when his cartoon titled "Snakes Have Legs" accumulated tens of millions of views. Following the massive success of this video, Danny continued creating animations in his unique style, which have gone on to reach hundreds of millions more around the world... making them laugh, cry, and think. Other awards include Forbes 30 under 30 class of 2020.