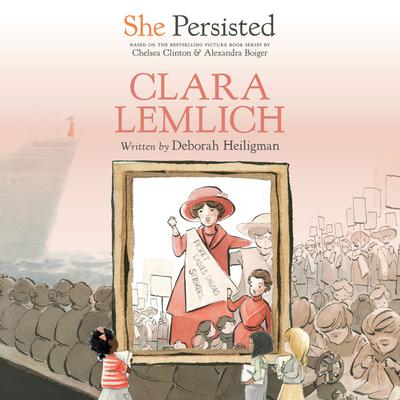 Inspired by the #1 New York Times bestseller She Persisted by Chelsea Clinton and Alexandra Boiger comes a chapter book series about women who stood up, spoke up and rose up against the odds--including Clara Lemlich!

In this chapter book biography by award-winning author Deborah Heiligman, readers learn about the amazing life of Clara Lemlich--and how she persisted.

Clara Lemlich immigrated to New York to escape danger in Ukraine, where she was born. She started working in clothing factories on the Lower East Side, only to realize that workers were being treated unfairly. So she stood up for the rights of workers, especially girls and women--and she won, changing the way factory workers were treated in America forever!

Deborah Heiligman (deborahheiligman.com) is the author of over thirty books, most of them nonfiction, including Torpedoed: The True Story of the World War II Sinking of "The Children's Ship"; Vincent and Theo: The Van Gogh Brothers; Charles and Emma: The Darwins' Leap of Faith; and The Boy Who Loved Math: The Improbable Life of Paul Erdos. Her books have won the SCBWI Golden Kite Award, the YALSA Excellence in Nonfiction Award, the Boston Globe-Horn Book Award for nonfiction, and an ALA Printz Honor, and they've been longlisted for the National Book Awards and been featured on the New York Times notable books list. She lives in New York City with her husband and their dog, Zuzu. Follow her on Twitter and Instagram @DHeiligman.