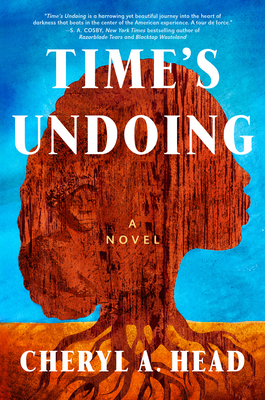 A searing and tender novel about a young Black journalist’s search for answers in the unsolved murder of her great-grandfather in segregated Birmingham, Alabama, decades ago—inspired by the author’s own family history

Birmingham, 1929: Robert Lee Harrington, a master carpenter, has just moved to Alabama to pursue a job opportunity, bringing along his pregnant wife and young daughter. Birmingham is in its heyday, known as the “Magic City” for its booming steel industry, and while Robert and his family find much to enjoy in the city’s busy markets and vibrant nightlife, it’s also a stronghold for the Klan. And with his beautiful, light-skinned wife and snazzy car, Robert begins to worry that he might be drawing the wrong kind of attention.

2019: Meghan McKenzie, the youngest reporter at the Detroit Free Press, has grown up hearing family lore about her great-grandfather’s murder—but no one knows the full story of what really happened back then, and his body was never found. Determined to find answers to her family’s long-buried tragedy and spurred by the urgency of the Black Lives Matter movement, Meghan travels to Birmingham. But as her investigation begins to uncover dark secrets that spider across both the city and time, her life may be in danger.

Inspired by true events, Time’s Undoing is both a passionate tale of one woman’s quest for the truth behind the racially motivated trauma that has haunted her family for generations and, as newfound friends and supporters in Birmingham rally around Meghan’s search, the uplifting story of a community coming together to fight for change.

Praise For Time's Undoing: A Novel…

“[Head] brings her gift for strong women protagonists and suspense to this tale about a young, Black female journalist from Detroit on a dangerous quest....Vivid and affecting....This heart-seizing tale even has a touch of the supernatural as it celebrates Black lives." —Booklist (STARRED REVIEW)

"Times Undoing is a harrowing yet beautiful journey into the heart of darkness that beats in the center of the American Experience. A tour de force." —S.A. Cosby, New York Times bestselling author of Razorblade Tears and Blacktop Wasteland

“Cheryl Head's storytelling skills are on full display in this enjoyable and piercing novel about one young woman's courageous search for answers about her family's past. Time's Undoing is a poignant meditation on how the legacies of both trauma—and triumph—shape our lives.  Head's efforts to excavate the past in the pages of this novel is a painful reckoning with racism, but ultimately a hopeful exercise in understanding resilience, grace and the importance of history to tell us who we are and who we might become, as individuals and as a country.  Pull up a chair book clubs because there's lots to discuss!”
—Christine Pride and Jo Piazza, bestselling authors of We Are Not Like Them

"Head’s novel provides not only an in-depth, fascinating portrait of a journalist in pursuit of a story, but also stands as a searing indictment of America’s racist legacy, from today’s BLM movement to the struggles of Black men and women a hundred years earlier. A suspenseful, immersive read that you won’t be able to put down."
—Fiona Davis, New York Times bestselling author of The Magnolia Palace

"A captivating and rich narrative of history and murder. Laden with echoes of the long-standing racial bias between Black people and law enforcement, the dual timeline of this suspense-filled story tells of one woman's entanglement and reckoning with it. Immersive. Impassioned. Time's Undoing will have readers hooked from page one. Highly recommended."
—Abby Collette, USA Today bestselling author of Soul of a Killer

"Powerful, timely, emotional and loaded with intensity, Cheryl Head’s Time's Undoing uses fiction to do what novels do best - shine a light on society while telling a page-turning story. In Meghan McKenzie, Head has created a fully-realized protagonist who guides readers through a haunting tale that is based on true events. Urgent, riveting, and heartfelt - I was immersed from page one."
—Alex Segura, bestselling author of Secret Identity

“Cheryl Head's Time's Undoing is truly mesmerizing. What a first-rate melding of painful past and hopeful future told by a master storyteller who gives readers a visceral look at the human cost of hate and fear and both heart and wings to redemptive peace. You won't be able to put it down. I couldn't.”
—Tracy Clark, author of the Cass Raines Chicago Mystery series

“In Time's Undoing, Cheryl Head establishes herself as a literary star. The clarity of her storytelling unravels the hard truths of racism against Black people in this nation, and how the fight against such injustices is a constant, intentional choice. A must-read novel that is sure to be embraced by a wide audience.”
—Naomi Hirahara, author of Clark and Division and the Mas Arai mystery series

"Cheryl A. Head's novel, Time's Undoing, is a searing and utterly disturbing look at life for the ancestors, and what it meant to be Black and stay alive in the Jim Crow south. But it is also a hopeful and endearing story of love, loss and the protection of our most precious commodity -- a family's history. This book will resonate with anyone who's ever looked at an old family photograph or listened to a story passed down through the generations and wondered, what if?"
—Wanda M. Morris, award-winning author of All Her Little Secrets and Anywhere You Run

“Time’s Undoing is time well spent – a heartbreaking dual timeline tale about the murder of a Black man in 1929 Birmingham and his great-granddaughter’s dogged attempts to find out what happened 90 years later. Cheryl Head uses her own grandfather’s murder at the hands of the local police to craft an unforgettable novel that’s a compelling mix of historical family drama, well-plotted mystery, and searing social commentary.”
—Kellye Garrett, Agatha, Anthony, and Lefty Award winning author of Like a Sister and Missing White Woman

"Cheryl Head's Time's Undoing is a poignant tale of one family's generational trauma and the strength and bravery of one woman's quest to uncover her history, her truth, and to finally find healing for her family. This is a story told in the most eloquent and gut-wrenching of ways, leaving me completely undone."
—Yasmin Angoe, Anthony Award nominee and author of Her Name Is Knight and They Come At Knight

“Time’s Undoing is a deeply absorbing and intricately-woven story of racial injustice and the healing power of truth. It confronts the issue of police brutality on the epic scale of decades and generations whilst preserving the intimate, human detail that gives the novel its heart.”
—Eleanor Shearer, author of River Sing Me Home

"Time’s Undoing is a novel both timeless and timely, exploring the complicated connections between a young Black journalist embroiled in the Black Lives Matter movement who decides to investigate a long-standing family mystery: the unsolved murder of her great-grandfather in segregated Alabama decades ago. Cheryl A. Head writes a sensitive and searing tale based on personal family history, which is sure to linger long in the memory."—Kate Quinn, New York Times bestselling author of The Diamond Eye

"Cheryl A. Head weaves a compelling, important tale of institutional racism and long-delayed justice in Time's Undoing. In Head's capable hands, this story of an intrepid reporter with a personal mission becomes both a chronicle of a devastatingly unjust past and a tale of a community working together to find a better way forward. An emotional portrait of the painful legacy of racism in America--and a reminder of how much work we still need to do to build a better future." —Kristin Harmel, New York Times bestselling author of The Forest of Vanishing Stars

Cheryl A. Head (she/her) is a writer, television producer, and broadcast executive. She is also the author of the award-winning Charlie Mack Motown mysteries, whose female PI protagonist is queer and Black. Head is an Anthony Award nominee, a two-time Lambda Literary Award finalist, a three-time Next Generation Indie Book Award finalist, and winner of the Golden Crown Literary Society’s Ann Bannon Popular Choice Award. Her books are included in the Detroit Public Library’s African American Booklist and in the Special Collections of the Library of Michigan.

In 2019, Head was named to the Hall of Fame of the New Orleans Saints and Sinners Literary Festival, and in 2022, she was awarded the Alice B Readers Appreciation Award. Head is vice chair of the national Bouchercon board of directors. She lives in Washington, DC, with her partner, and with Abby and Frisby, who provide canine supervision.
Loading...
or support indie stores by buying on