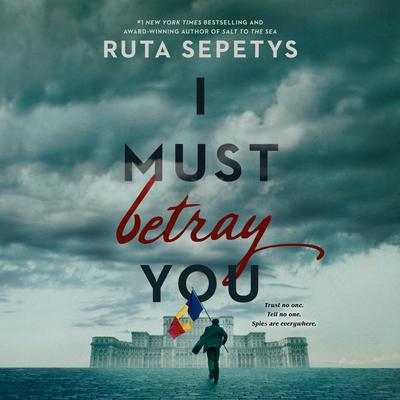 I Must Betray You (Digital Audiobook)

“When I pick up a Ruta Sepetys novel, I know that I will have my heart broken and learn from history. Romania in 1989 is a fascinating, hidden history that is brought to light in this insanely propulsive story. It will grab you and not let go.”
— Carrie Deming, The Dog Eared Book, Palmyra, NY
View the List

Praise for I Must Betray You:

“As educational as it is thrilling...[T]he power of I Must Betray You [is] it doesn’t just describe the destabilizing effects of being spied on; it will make you experience them too.” –New York Times Book Review

“A historical heart-pounder…Ms. Sepetys, across her body of work, has become a tribune of the unsung historical moment and a humane voice of moral clarity.” –The Wall Street Journal

* "Sepetys’s latest book maintains the caliber readers have come to expect from an author whose focus on hidden histories has made her a YA powerhouse of historical ­fiction…Sepetys is a formidable writer, and her stories declare the need to write about global issues of social injustice. For that reason and her attention to detail, this is a must-read." –School Library Journal, starred review

“Sepetys keeps readers riveted to this vivid, heartbreaking and compelling novel, locked into every meticulously researched detail. I Must Betray You demands a full investment from its audience--through poetic writing, sympathetic characters, revolutionary plot and pacing, it grips the heart and soul and leaves one breathless.” –Shelf Awareness, starred review

"A master class in pacing and atmosphere." –BookPage