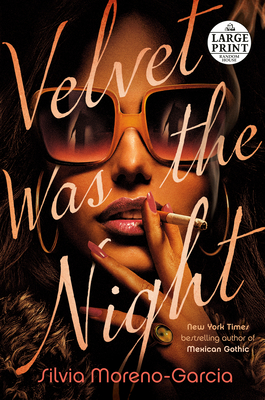 Velvet Was the Night

“From the author of Mexican Gothic comes a classic noir with a side of romance based on the Mexican government’s suppression of dissent in the ’60s and ’70s and the involvement of the CIA and KGB.”
— Rebecca Dowling, Hockessin Book Shelf, Hockessin, DE
View the List

GOOD MORNING AMERICA BUZZ PICK • From the New York Times bestselling author of Mexican Gothic comes a simmering historical noir about a daydreaming secretary, a lonesome enforcer, and the mystery of the missing woman they’re both desperate to find.

Mexico in the 1970s is a dangerous country, even for Maite, a secretary who spends her life seeking the romance found in cheap comic books and ignoring the activists protesting around the city. When her next-door neighbor, the beautiful art student Leonora, disappears under suspicious circumstances, Maite finds herself searching for the missing woman—and journeying deeper into Leonora’s secret life of student radicals and dissidents.

Mexico in the 1970s is a politically fraught land, even for Elvis, a goon with a passion for rock ’n’ roll who knows more about kidney-smashing than intrigue. When Elvis is assigned to find Leonora, he begins a blood-soaked search for the woman—and his soul.

Swirling in parallel trajectories, Maite and Elvis attempt to discover the truth behind Leonora’s disappearance, encountering hitmen, government agents, and Russian spies. Because Mexico in the 1970s is a noir, where life is cheap and the price of truth is high.

Praise For Velvet Was the Night…

“[Velvet Was the Night] is a noir with a heart of gold, and it’s a narrative in which the empathy we feel for its characters ultimately reveals an important truth: That Moreno-Garcia is not only a talented storyteller but also an incredibly versatile one.”—NPR

“An absolute flex . . . [Velvet Was the Night] left me marveling at what kind of sorceress Moreno-Garcia must be as she reworks genre after genre, weaving in Mexican history and culture, satisfying familiar cravings without resorting to mere pastiche. The most tantalizing suspense of all comes with wondering what she’ll do next.”—Slate

“Moreno-Garcia proves her prowess as a historical fiction powerhouse again.”—BuzzFeed

“Immensely satisfying, refreshingly new and gloriously written . . . Moreno-Garcia mashes up Anglocentric genres with midcentury Mexican history, resulting in a brew flavored with love, heartbreak, violence, music and unsettling dread. . . . The gift of this book, and Moreno-Garcia’s storytelling, is how it imbues this well-worn genre with added strength, grace and even musicality.”—The New York Times Book Review

“An enthralling tale that’s as fun as it is mysterious . . . The characters are fascinating, the tone lush and romantic, and it’s all wrapped up in a mystery with twists and turns one likely won’t see coming. . . . [Moreno-Garcia is] the sort of author whose works automatically end up on your ‘must-read’ list.”—USA Today

“The author’s previous novel, Mexican Gothic, turned the screw on the traditional ghost story; here she gleefully pries hard-boiled noir from the cold, white hands of Chandler and Hammett.”—Oprah Daily

“A delicious, twisted treat for lovers of noir. Silvia Moreno-Garcia is a masterful writer who pulls you into her dark world and never lets you go. From the suspenseful, slow-burn plot to the crisp, desperate characters, you will be obsessed.”—Simone St. James, New York Times bestselling author of The Sun Down Motel

“A lush, magnificent trip into a world of danger and discovery. Not to be missed!”—S.A. Cosby, author of Blacktop Wasteland and Razorblade Tears

“A rich novel with an engrossing plot, distinctive characters, and a pleasing touch of romance. Readers won’t be able to put it down.”—Publishers Weekly (starred review)

“Fans of Moreno-Garcia’s other novels will relish this title, as will noir aficionados and readers who like stories about everymen and women rising to the occasion.”—Library Journal (starred review)

“It’s hard to describe how much fun this novel is. . . . A noir masterpiece.”—Kirkus Reviews (starred review)

“A winner that brings together a romance-fiction obsessed secretary and a lovelorn enforcer during the brutally suppressed student riots in 1970s Mexico City.”—Booklist (starred review)

Silvia Moreno-Garcia is the author of the novels Velvet Was the Night, Mexican Gothic, Gods of Jade and Shadow, and a bunch of other books. She has also edited several anthologies, including the World Fantasy Award–winning She Walks in Shadows (a.k.a. Cthulhu’s Daughters). She has been nominated for the Locus Award for her work as an editor and has won the British Fantasy Award and the Locus Award for her work as a novelist.
Loading...
or support indie stores by buying on