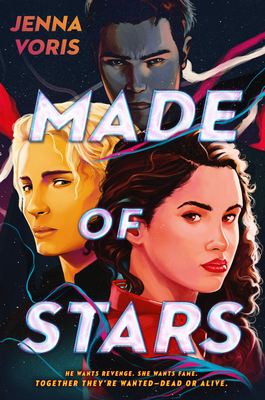 Inspired by the lawless love story of Bonnie and Clyde, Jenna Voris’s heart-stopping tale of passion and crime will have you seeing stars.

"A thrill ride of the highest caliber. Made of Stars is an explosion of space warfare with beautifully violent criminals you’ll love to accompany." —Chloe Gong, #1 New York Times bestselling author of These Violent Delights

Shane and Ava are a team. He steals the aircraft, she charms their mark, and together they take what they need. Not even their distracting chemistry could get in the way. Until Shane was caught and left to rot on a prison moon. Now, freshly escaped from confinement and simmering with anger, he has his sights set on their biggest job yet.

Cyrus just graduated from the flight academy with a shiny new position lined up reporting to a well-respected general. On his very first assignment, he stops the outlaws in their tracks—or he would have, if his annoyingly handsome copilot, Lark, hadn’t fallen for Ava’s deception.

But when Shane uncovers a top-secret plot that would leave his and Ava’s home world at the mercy of Cyrus’s military leaders, he makes it his mission to thwart them at all costs. It isn’t long before the two of them make interstellar headlines with each new heist. And thanks to a chance run-in with the rebels, Cyrus is caught between two versions of the truth. He must pick a side—and fast. Because Shane and Ava will bring the planet to its knees . . . or die trying.

Praise For Made of Stars…

Raves for Made of Stars

"A thrill ride of the highest caliber. Made of Stars is an explosion of space warfare with beautifully violent criminals you’ll love to accompany." —Chloe Gong, #1 New York Times bestselling author of These Violent Delights

“With as much action and intrigue as there is heart, you’ll be swept away on this adventure through the stars.” —Alechia Dow, author of The Sound of Stars

“Thrilling and intimate, full of both rage and hope, Made of Stars is a stellar debut. Voris balances a complex plot, a ragtag crew of richly drawn characters, and humor alongside a thoughtful examination of economic exploitation. Come for the cool space battles, stay for the emotional devastation.” —Allison Saft, New York Times bestselling author of A Far Wilder Magic

“An absolute supernova of a book. Made of Stars is a thrilling adventure across the galaxy driven by a big, beating heart. Voris is a spectacular new talent.” —Sasha Peyton Smith, New York Times bestselling author of The Witch Haven

“Sharp and cinematic, Made of Stars is stellar storytelling, with a gritty universeand rich characters just waiting to rock your world and break your heart.” —Lora Beth Johnson, author of the Goddess in the Machine duology

"A rollercoaster ride-or-die from the explosive start to the heart-wrenching end! Queer characters, romantic angst, and killer plot twists make Voris a new voice that you will definitely want to devour." —Meg Long, author of Cold the Night, Fast the Wolves

Jenna Voris writes books about ambitious girls and galaxy traversing adventures. She was born and raised in Indiana—where she learned to love roundabouts and the art of college basketball—and now calls Washington D.C. home. When she’s not writing, she can be found perfecting her road trip playlists and desperately trying to keep her houseplants alive. Made of Stars is her debut.