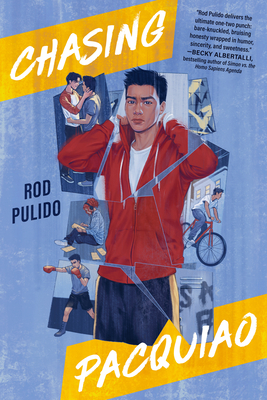 Experience the extreme joys, sorrows, and triumphs of a queer Filipino-American teenager struggling to prove himself in an unforgiving world. A poignant coming-of-age story, perfect for fans of Patron Saints of Nothing and Juliet Takes a Breath.

Self preservation. That's Bobby's motto for surviving his notoriously violent high school unscathed. Being out and queer would put an unavoidable target on his back, especially in a Filipino community that frowns on homosexuality. It's best to keep his head down, get good grades, and stay out of trouble.

But when Bobby is unwillingly outed in a terrible way, he no longer has the luxury of being invisible. A vicious encounter has him scrambling for a new way to survive—by fighting back. Bobby is inspired by champion Filipino boxer Manny Pacquiao to take up boxing and challenge his tormentor. Then Pacquiao publicly declares his stance against queer people, and Bobby's faith—in his hero and in himself—is shaken to the core.

A powerful and unflinching debut that will both shatter and uplift hearts with every read.

"Rod Pulido delivers the ultimate two-punch: bare-knuckled, bruising honesty wrapped in humor, sincerity, and sweetness. If you’ve ever been let down by your hero, this knockout of a book is here to treat your wounds and heal your heart."
—Becky Albertalli, bestselling author of Simon vs. the Homo Sapien Agenda

"What should we do when our heroes let us down? The answer: Pick up Rod Pulido's book. This story has it all. Humor, love, self-acceptance, pain. It packs all the punches."
—Erin Entrada Kelly, Newbery Medalist and bestselling author

"With Chasing Pacquiao, Pulido steps into the ring with an earnest and compelling debut that pulls no punches as it explores the courage and community needed to stand up to hatred."
—Randy Ribay, author of the National Book Award finalist, Patron Saints of Nothing

“Chasing Pacquiao is a timely knockout. Rod Pulido marvelously balances humor and honesty while exploring bigotry, socioeconomics, power, and how we become our own heroes. A heavy-hitting, must-read debut.”
—Julian Winters, award-winning author of Right Where I Left You

Rod Pulido grew up in Cerritos, California. As a child, he loved making toy spaceships out of cardboard and devouring ice cream straight from the carton—he still does both. He earned his Bachelor of Arts in film production from California State University, Long Beach, where he founded the first Pilipino Graduation Ceremony in Southern California. His movie The Flip Side became the first feature by a Filipino director to world premiere at the Sundance Film Festival. Rod strives to uplift and entertain with stories that highlight the Fil-Am experience. He enjoys collecting comic books and working out at the gym—stereotypes be damned! Chasing Pacquiao is his debut YA novel. Follow him on Instagram and Twitter @RodAPulido.com
Loading...
or support indie stores by buying on