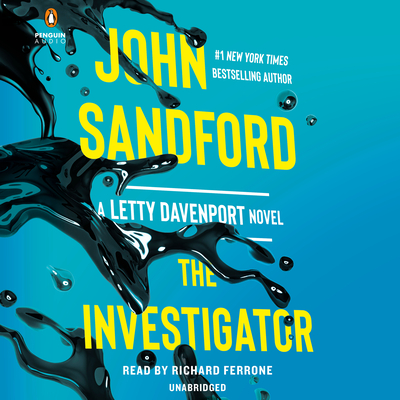 Letty is partnered with a DHS investigator, John Kaiser, and they head to Texas.  When the case quicky turns deadly, they know they’re on the track of something bigger.  The militia group has set in motion an explosive plan . . . and the clock is ticking down.

Praise For The Investigator…

“The Investigator is a procedural action thriller in which the technical sleuthing only heightens the tension. Letty is such a capable character, and Mr. Sandford such a fine tactician, it would seem incomprehensible and even cruel to deny readers a swift follow-up.”--Wall Street Journal

“John Sandford created a winning formula with his furiously paced Prey novels, which star Lucas Davenport, a Minnesota detective turned U.S. marshal with a penchant for sharp dressing, high romancing and expert marksmanship. In The Investigator he moves the chess pieces to a different board.”--New York Times

"Readers are treated to Sandford's well-crafted prose, conversational but never chatty and charged with boisterous humor. A top-line thriller from one of thegenre's heavy hitters."--Booklist

"If John Sandford’s The Investigator isn’t the most-anticipated spring book, it’s darn close…Sandford writes fully realized characters and no doubt he will deepen our understanding of Letty as the series matures.”--Pioneer Press

“Fans of the Lucas Davenport series will find much to like in the adventures of his adopted daughter.”--Criminal Element