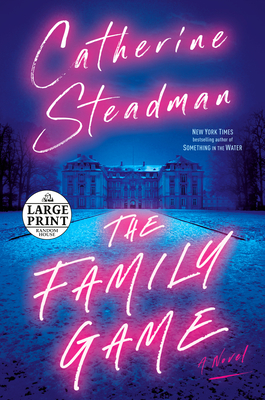 NEW YORK TIMES EDITORS’ CHOICE • “A powerful family and a deadly game. Be prepared for a nail-biting, roller-coaster of a ride in Catherine Steadman’s classy and ingenious new thriller.”—B. A. Paris, New York Times bestselling author of Behind Closed Doors

From the New York Times bestselling author of Something in the Water, Mr. Nobody, and The Disappearing Act. . . .

ONE OF THE BEST BOOKS OF THE YEAR: The New York Times

THE RULES
1. Listen carefully
2. Do your research
3. Trust no one
4. Run for your life

Harriet Reed, a novelist on the brink of literary stardom, is newly engaged to Edward Holbeck, the heir of an extremely powerful family. And even though Edward has long tried to severe ties with them, news of the couple’s marital bliss has the Holbecks inching back into their lives.

As Harriet is drawn into their lavish world, the family seems perfectly welcoming. So when Edward’s father, Robert, hands Harriet a tape of a book he’s been working on, she is desperate to listen.

But as she presses play, it’s clear that this isn’t just a novel. It’s a confession.

A confession to a grisly crime. A murder. And, suddenly, the game is in motion.

Feeling isolated and confused, Harriet must work out if this is part of a plan to test her loyalty. Or something far darker. What is it that Robert sees in her? Why give her the power to destroy everything?

Praise For The Family Game: A Novel…

Praise for The Family Game

“Harriet has just announced her engage­ment to the preternaturally rich and charming Edward Holbeck—but his family, it turns out, is what you might come up with if you took the Roys from Succession and blended them with the Murdochs, the Macbeths, and the Borgias. Even worse, they’re obsessed with bizarre psychologi­cal games.”—The New York Times Book Review (Editors’ Choice)

“A powerful family and a deadly game: Be prepared for a nail-biting roller-coaster of a ride in Catherine Steadman’s classy and ingenious new thriller.”—B. A. Paris, New York Times bestselling author of Behind Closed Doors

“Millionaires, marriage and murder make for a potent cocktail in this compelling tale set among the super-rich of New York’s elite.”—T. M. Logan, internationally bestselling author of Lies

“Instantly compelling and filled with ingenious twists and brilliant characters . . . This is sublime thriller writing.”—B. P. Walter, author of The Couple’s Secret

Praise for the novels of Catherine Steadman

“[A] tricky psychological puzzle . . . It’s a joy to encounter a suspenseful book whose turns lurk, rather than lumber, around the corner.”—The New York Times Book Review

“Mesmerizing . . wildly imaginative . . . Suspense is peppered in all the right places.”—Associated Press

Catherine Steadman is an actress and author based in London. She has appeared in leading roles on British and American television as well as on stage in the West End, where she has been nominated for a Laurence Olivier Award. She grew up in the New Forest, Hampshire, and now lives in North London with her husband and daughter. Steadman’s first novel, Something in the Water, was a New York Times bestseller with rights sold in more than thirty territories. She is also the author of Mr. Nobody and The Disappearing Act.
Loading...
or support indie stores by buying on