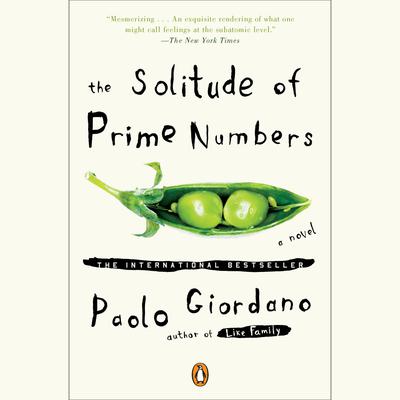 A stunning debut novel about the intertwined destinies of two friends brought together by childhood tragedy.

A three-million-copy Italian bestseller and winner of that country’s prestigious Premio Strega award.

A prime number is inherently a solitary thing: it can only be divided by itself, or by one: it never truly fits with another. Alice and Mattia, too, move on their own axis, alone with their personal tragedies. As a child, Alice’s overbearing father drove her first to a terrible skiing accident, and then to anorexia. When she meets Mattia she recognizes a kindred, tortured spirit, and Mattia reveals to Alice his terrible secret: that as a boy he abandoned his mentally-disabled twin sister in a park to go to a party, and when he returned, she was nowhere to be found.
These two irreversible episodes mark Alice and Mattia’s lives for ever, and as they grow into adulthood their destinies seem intertwined: they are divisible only by themselves and each other. But the shadow of the lost twin haunts their relationship, until a chance sighting by Alice of a woman who could be Mattia’s sister forces a lifetime of secret emotion to the surface.

A meditation on loneliness and love, The Solitude of Prime Numbers asks, can we ever truly be whole when we’re in love with another? And when Mattia is asked to choose between human love and his professional love — of mathematics — which will make him more complete?
Loading...