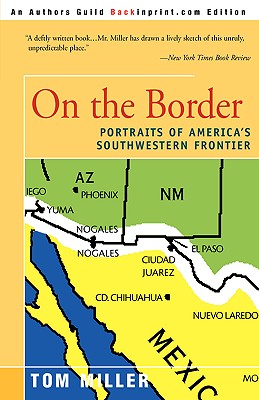 Tom Miller's On the Border frames the land between the United States and Mexico as a Third Country, one 2,000 miles long and twenty miles wide. This Third Country has its own laws and its own outlaws. Its music, language, and food are unique. On the Border, a first-person travel narrative, portrays this bi-national culture, "unforgettable to every reader lucky enough to discover this gem of southwestern Americana." (San Diego Union-Tribune) It's a "deftly written book," said the New Times Book Review. "Mr. Miller has drawn a lively sketch of this unruly, unpredictable place." Traveling from the Gulf of Mexico to the Pacific Ocean, Miller offers "cultural history and fine journalism." (Dallas Times Herald)

Among his stops is Rosa's Cantina in El Paso, the Arizona site where a rancher sadistically tortured three Mexican campesinos, and the 100,000-watt XERF radio station where Wolfman Jack broadcasts nightly. He interviews children in both countries, all of whom insist that the candy on the other side is superior. On the Border, translated into Spanish, French, and Japanese, was the first book to identify and describe this land as a Third Country. Miller "knows this country," says Newsday, "feels its joys and sorrows, hears its music and loves its soul.

Award-winning author Tom Miller has written about the American West and Latin America for LIFE, Smithsonian, Rolling Stone, and Natural History among other magazines, as well as the New York Times and the Washington Post. His many books include the travel classics Revenge of the Saguaro, The Panama Hat Trail, Trading with the Enemy, and On the Border. Well-traveled in Cuba and elsewhere in the Americas, Miller leads a Literary Havana trip every January. He has lived in Arizona for four decades, and gives talks at colleges throughout the country about his travels. His web site is www.tommillerbooks.com.
Loading...
or
Not Currently Available for Direct Purchase