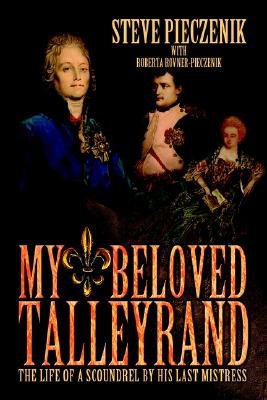 The Life of a Scoundrel by His Last Mistress

"'I am first to admit that a woman, especially a young woman, does not attach herself to a brilliant, older, accomplished man without seeing some reward at the end. I may have been a master in the art of submission but I am not without self-respect. If Talleyrand were here with me now, he would agree that what began as a manipulation on both our parts, turned into a wonderful partnership.""

Talleyrand's mistresses, intrigues, betrayals, and deceits were legendary, but only one woman could capture his love: his niece and mistress Dorothea, who records his life in the enthralling masterpiece "My Beloved Talleyrand."

A debauched French aristocrat bishop, Charles-Maurice de Talleyrand-P rigord renounced the Church and his nobility in order to save France from self-destruction. He supported and then overthrew King Louis XVI, the leaders of the French Revolution, and finally Napoleon Bonaparte.

After the defeat of Napoleon at Waterloo, Talleyrand dominated the Congress of Vienna, determining the course of history for both Europe and America for the next one hundred years.