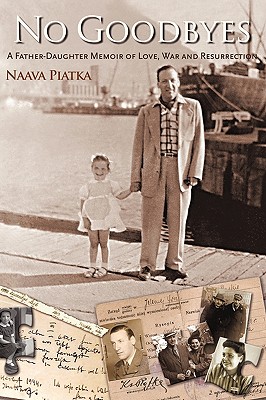 A Father-Daughter Memoir of Love, War and Resurrection

When actress/playwright/author Naava Piatka interviews her Holocaust survivor father, Xavier Piat, she is amazed to hear such intimate, graphic revelations of family drama, political upheaval, sexual seduction, divorce, mass murder, betrayal and ultimate creative triumph. Soon, she is thrust into an epic saga of one man's journey through the shifting European landscape of Communism, Nazism, Zionism, Nationalism and immigration - where survival depends on luck, who you know, and finding the friend beneath the foe.

Reflecting on their complex father-daughter relationship, Naava discovers that her former god is a sentimental human, who emerged from the horrors of war and death camps, the sole survivor of his once large family. In entering his world, she begins to redefine her own. In letting her in, she learns to let go.

"NO GOODBYES" reminds us that we can connect through our stories, that suffering can turn into celebration, and that the power of family and love endures beyond death.