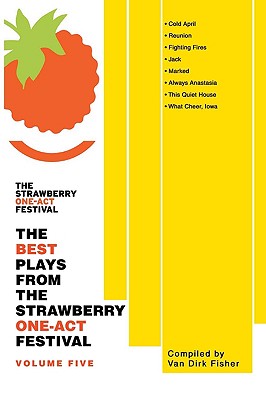 The Best Plays From The Strawberry One-Act Festival

COLD APRIL by John P. McEneny. Set in Rawanda in 1994, a thirteen-year old girl refuses to hand over her friends to the Hutu rebels. REUNION by Brian Podnos. A father and son must face their demons when the son is released from rehab. FIGHTING FIRES by Von H. Washington, Sr. On the eve of his 18th birthday, a young man kidnaps his absentee father and demands the attention he believes was owed him during his developmental years. JACK by Daren Taylor. Jack, a dark retelling of an old fairy tale. For every dream, there's a nightmare. What happens when a boy believes that he's seen God? MARKED by Cassandra Lewis, a dark comedy that explores the connection between love, insanity and social responsibility. ALWAYS ANASTASIA by Michele Leigh. A disillusioned cop on the verge of a nervous breakdown believes he is being tormented by a narcissistic psychopath. THIS QUIET HOUSE by Toby Levin. What happens when a stepmother's desire to have a son catches fire? WHAT CHEER, IOWA by Jeff Belanger. Tempers flare and sanity is on the line as five people struggle against the gargantuan pressure of waiting to find out if their cars passed their annual inspection.