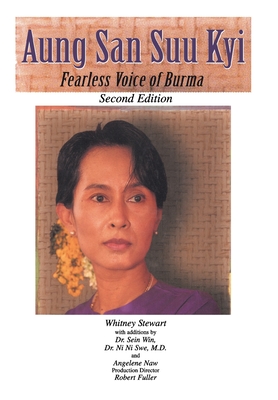 When Aung San Suu Kyi returned to her native Burma to tend to her ailing mother, no one could have known that, within a few months, the quiet woman would become a leader of her people. In 1989, after Suu Kyi had worked only a year in Burma's renewed struggle for democracy, the military government place her under house arrest. The following years, while still confined to her home, Suu Kyi led Burma's National League for Democracy to victory in a national election. The military government refused to recognize the election.
In 1991, still under arrest, Aung San Suu Kyi won the Nobel Peace Prize. Upon her release from house arrest in 1995, thousands flocked to Suu Kyi's home in Rangoon to hear her speak. There she offered hope that democracy may yet blossom in Burma.
Whitney Stewart's biography, based on personal interviews with Aung San Suu Kyi and those around her, illuminates the dangers endured and the triumphs enjoyed by this inspiring woman, who has been put back under house arrest in her homeland.
Additional materials by Burmese authors brings this fascinating biography right up-to-date, including the Saffron Revolution of 2007.

Whitney Stewart loves to interview compassionate leaders. She went to Burma to visit the country and interview Aung San Suu Kyi. She has also interviewed the 14th Dalai Lama of Tibet and Sir Edmund Hillary and written biographies of them. She lives with her husband and son in New Orleans.
Loading...
or support indie stores by buying on