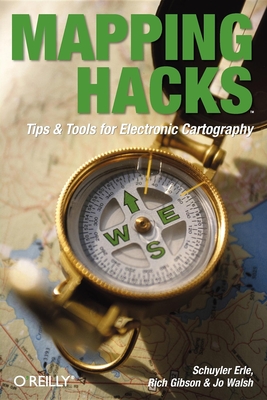 Since the dawn of creation, man has designed maps to help identify the space that we occupy. From Lewis and Clark's pencil-sketched maps of mountain trails to Jacques Cousteau's sophisticated charts of the ocean floor, creating maps of the utmost precision has been a constant pursuit. So why should things change now?Well, they shouldn't. The reality is that map creation, or cartography, has only improved in its ease-of-use over time. In fact, with the recent explosion of inexpensive computing and the growing availability of public mapping data, mapmaking today extends all the way to the ordinary PC user.Mapping Hacks, the latest page-turner from O'Reilly Press, tackles this notion head on. It's a collection of one hundred simple--and mostly free--techniques available to developers and power users who want draw digital maps or otherwise visualize geographic data. Authors Schuyler Erle, Rich Gibson, and Jo Walsh do more than just illuminate the basic concepts of location and cartography, they walk you through the process one step at a time.Mapping Hacks shows you where to find the best sources of geographic data, and then how to integrate that data into your own map. But that's just an appetizer. This comprehensive resource also shows you how to interpret and manipulate unwieldy cartography data, as well as how to incorporate personal photo galleries into your maps. It even provides practical uses for GPS (Global Positioning System) devices--those touch-of-a-button street maps integrated into cars and mobile phones. Just imagine: If Captain Kidd had this technology, we'd all know where to find his buried treasure With all of these industrial-strength tips and tools, Mapping Hacks effectively takes the sting out of the digital mapmaking and navigational process. Now you can create your own maps for business, pleasure, or entertainment--without ever having to sharpen a single pencil.

Schuyler Erle was born in a small paper bag in Philadelphia, and then again five days later in Baltimore. As a youth, he had to get up every morning two hours before he went to bed in order to walk fifteen miles uphill to school, and then another seventeen miles uphill to get home in the evening. After many years of some nonsense involving Karnaugh maps, a botched attempt at a Red Cross sailing certificate, and the early works of Chomsky, Schuyler was finally and at long last sent packing with something his mentors found at the bottom of a Cracker Jack box. Later, after a tragic accident that left him nearly completely lacking in common sense, he served brief stints on Phobos and Ganymede with the Space Patrol, before returning to study n-dimensional unicycle frisbee golf at a yak herding collective in Miami. Somewhere along the line he made the grave error of attempting to implement a full-scale multi-user web application using a combination of tcsh, awk, and sed, which lead him straight into the arms of O'Reilly & Associates, first as a reader, and then as an author and humble developer. Four years & fifty thousand miles later, we present him in his full and unabridged form, where he hacks Perl behind the scenes at the O'Reilly Network, does on-site technical support for ORA's fine conferences team, is involved in a variety of database and production development projects across the company, and still manages to write and give conference talks for ORA from time to time.Rich Gibson is a Perl/Database programmer in Santa Rosa. He has worked professionally with computers since 1982 when he created Public Utility Rate Case Models in SuperCalc on an Osborne II. His current fascination is creating tools to aid in the acquisition, management, and presentation of information with a geographic component. He is currently converting an old golf cart into a mobile geo annotation platform.Rich is active with the NoCat Community Network in Sebastopol, California, and is the primary developer of NoCat Maps (http: //maps.nocat.net/).Jo Walsh is a freelance hacker and software artist who started out building web systems for the Guardian, the ICA and state51 in London. She now works with the semantic web, spatial annotation and bots.
Loading...
or support indie stores by buying on