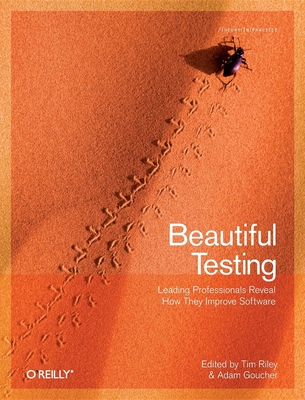 Successful software depends as much on scrupulous testing as it does on solid architecture or elegant code. But testing is not a routine process, it's a constant exploration of methods and an evolution of good ideas.

Beautiful Testing offers 23 essays from 27 leading testers and developers that illustrate the qualities and techniques that make testing an art. Through personal anecdotes, you'll learn how each of these professionals developed beautiful ways of testing a wide range of products -- valuable knowledge that you can apply to your own projects.

Here's a sample of what you'll find inside:

All author royalties will be donated to the Nothing But Nets campaign to save lives by preventing malaria, a disease that kills millions of children in Africa each year.

This book includes contributions from:

Tim Riley is the Director of Quality Assurance at Mozilla. He has tested software for 18 years including everything from spacecraft simulators, ground control systems, high security operating systems, language platforms, application servers, hosted services and open source web applications. He has managed software testing teams in startups to large corporations consisting of 3 to 120 people in size and in up to 6 countries. He has a software patent for a testing execution framework which matches test suites to available test systems. He enjoys being a breeder caretaker for Canine Companions for Independence (cci.org) along with live and studio sound engineering.Adam Goucher has been testing software professionally for over ten years. In that time he has worked with start-ups, large multi-nationals and ones in between in both traditional and agile testing environments. A believer in the communication of ideas big and small, he writes frequently at http: //adam.goucher.ca and teaches testing skills at a Toronto area technical college. In his off hours he can be found either playing or coaching box lacrosse - and then promptly applying lessons learned to testing. He is also an active member of the Association for Software Testing.
or support indie stores by buying on
Copyright © 2020 American Booksellers Association