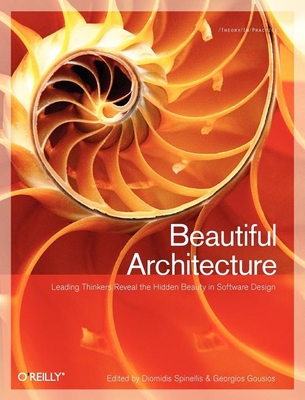 What are the ingredients of robust, elegant, flexible, and maintainable software architecture? Beautiful Architecture answers this question through a collection of intriguing essays from more than a dozen of today's leading software designers and architects. In each essay, contributors present a notable software architecture, and analyze what makes it innovative and ideal for its purpose.

Some of the engineers in this book reveal how they developed a specific project, including decisions they faced and tradeoffs they made. Others take a step back to investigate how certain architectural aspects have influenced computing as a whole. With this book, you'll discover:

Go behind the scenes to learn what it takes to design elegant software architecture, and how it can shape the way you approach your own projects, with Beautiful Architecture.

Diomidis Spinellis is an Associate Professor in the Department of Management Science and Technology at the Athens University of Economics and Business, Greece. His research interests include software engineering, programming languages, internet information systems, computer security, and intelligent optimization methods. He holds an MEng in Software Engineering and a PhD in Computer Science both from Imperial College London.Spinellis is a FreeBSD committer and the author of many open-source software packages, libraries, and tools. His implementation of the Unix sed stream editor is part of all BSD Unix distributions and Apple's Mac OS X. Other tools he has developed include the UMLGraph declarative UML drawing engine, the ckjm tool for calculating Chidamber and Kemerer object-oriented metrics in large Java programs, the Outwit suite for integrating Windows features with command-line tools, the fileprune backup file management facility, and the socketpipe network plumbing utility. In 2004 he adopted and has since been maintaining and enhancing the popular bib2xhtml BibTeX bibliography format to HTML converter. Currently he is also serving as the scientific coordinator of the EU-funded SQO-OSS cooperative research project, a software quality observatory for open-source software.Spinellis has published two books in Addison-Wesley's Effective Programming Series: in 2004 Code Reading: the Open Source Perspective, which received a Software Development Productivity Award in 2004 and has been translated into six other languages, and in 2006 Code Quality: the Open Source Perspective, which also received a Software Development Productivity Award in 2007. Both books use hundreds of examples from large open source systems, like the BSD Unix operating system, the Apache Web server, and the HSQLDB Java database engine, to demonstrate how developers can comprehend, maintain, and evaluate existing software code. Spinellis has also published more than 100 technical papers in journals and refereed conference proceedings. The article A Survey of Peer-to-Peer Content Distribution Technologies he co-authored in 2004 appeared in the list of ACM's most downloaded digital library articles throughout 2005 and 2006. He is a member of the editorial board of IEEE Software, authoring the regular Tools of the Trade column, and Springer's Journal in Computer Virology. Spinellis is a member of the ACM, the IEEE, the Usenix Association, the Greek Computer Society, the Technical Chamber of Greece, a founding member of the Greek Internet User's Society, and an active Wikipedian. He is four times winner of the International Obfuscated C Code Contest and a member of the crew listed in the Usenix Association 1993 Lifetime Achievement Award.Georgios Gousios is a researcher by profession, a software engineer by education and a software enthusiast by passion. Currently, he is working on his PhD thesis at the Athens University of Economics and Business, Greece. His research interests include virtual machines, operating systems, software engineering and software quality. He holds an MSc with distinction from the University of Manchester, UK. Gousios has contributed code to various OSS projects and also worked in various R&D projects in both academic and commercial settings. He is currently the project manager, design authority and core development team member for SQO-OSS, a multinational EU-funded research project, expanding in 5 countries, being developed by 40 people and consisting of 65k lines of code. The project investigates novel ways for evaluating software quality.In his academic life, Gousios has published 10 technical papers in referred conferences and journals. One of those, the article A comparison of dynamic web content technologies of the Apache web server won the best paper award at the 2002 System Administration and Networking Conference, being the first comprehensive study in its field. Gousios is a member of the ACM, the IEEE, the Usenix Association and the Technical Chamber of Greece.
Loading...
or support indie stores by buying on