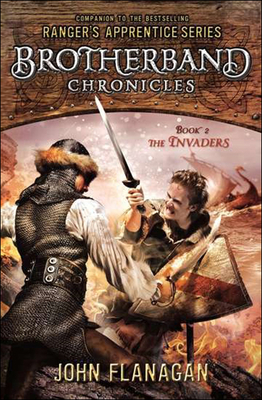 From the author of the global phenomenon Ranger's Apprentice
Hal and the Herons have done the impossible. This group of outsiders has beaten out the strongest, most skilled young warriors in all of Skandia to win the Brotherband competition. But their celebration comes to an abrupt end when the Skandians' most sacred artifact, the Andomal, is stolen--and the Herons are to blame.
To find redemption they must track down the thief Zavac and recover the Andomal. But that means traversing stormy seas, surviving a bitter winter, and battling a group of deadly pirates willing to protect their prize at all costs. Even Brotherband training and the help of Skandia's greatest warrior may not be enough to ensure that Hal and his friends return home with the Andomal--or their lives.
Perfect for fans of J.R.R. Tolkien's Lord of the Rings, T.H. White's The Sword in the Stone, Christopher Paolini's Eragon series, and George R. R. Martin's Game of Thrones/A Song of Ice and Fire series.

John Flanagan grew up in Sydney, Australia, hoping to be a writer. John began writing Ranger's Apprentice for his son, Michael, ten years ago, and is still hard at work on the series and its spinoff, Brotherband Chronicles. He currently lives in the suburb of Manly, Australia, with his wife. In addition to their son, they have two grown daughters and four grandsons.
or
Not Currently Available for Direct Purchase
Copyright © 2020 American Booksellers Association