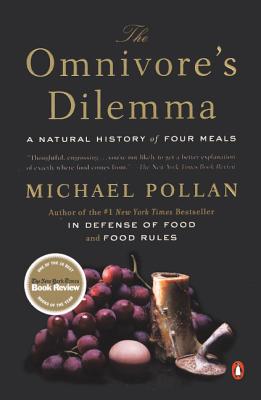 A Natural History of Four Meals

One of the "New York Time""s Book Review""'s "Ten Best Books of the Year
Winner of the James Beard Award
Author of #1 "New York Times" Bestsellers "In Defense of Food "and "Food Rules"
Today, buffeted by one food fad after another, America is suffering from what can only be described as a national eating disorder. Will it be fast food tonight, or something organic? Or perhaps something we grew ourselves? The question of what to have for dinner has confronted us since man discovered fire. But as Michael Pollan explains in this revolutionary book, how we answer it now, as the dawn of the twenty-first century, may determine our survival as a species. Packed with profound surprises, "The Omnivore's Dilemma "is changing the way Americans thing about the politics, perils, and pleasures of eating.
Coming from The Penguin Press in 2013, Michael Pollan's newest book "Cooked: A Natural History of Transformation"--the story of our most trusted food expert's culinary education
"Thoughtful, engrossing ... You're not likely to get a better explanation of exactly where your food comes from."
-"The New York Times Book Review"
"An eater's manifesto ... Pollan's] cause is just, his thinking is clear, and his writing is compelling. Be careful of your dinner "
-"The Washington Post"
"Outstanding... a wide-ranging invitation to think through the moral ramifications of our eating habits."
"--The New Yorker"
"If you ever thought 'what's for dinner' was a simple question, you'll change your mind after reading Pollan's searing indictment of today's food industry-and his glimpse of some inspiring alternatives.... I just loved this book so much I didn't want it to end."
"-The Seattle Times"

MICHAEL POLLAN is the author of six previous books, including "Food Rules," "In Defense of Food," "The Omnivore's Dilemma," and "The Botany of Desire," all "New York Times "bestsellers. A longtime contributor to "The New York Times Magazine," Pollan is the recipient of the James Beard Award and is also the Knight Professor of Journalism at Berkeley. In 2010, "Time" magazine named him one of the one hundred most influential people in the world. His most recent book, "Cooked: Finding Ourselves in the Kitchen," will be published by The Penguin Press in April 2013.

www.michaelpollan.com
Loading...
or
Not Currently Available for Direct Purchase