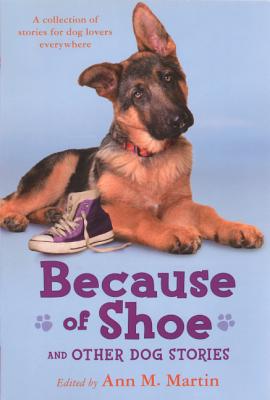 Because of Shoe and Other Dog Stories (Prebound)

Ann M. Martin is the author of many novels, including "A Corner of the Universe," winner of the Newbery Honor, and "Everything for a Dog," which has sold over 90,000 copies. Ann lives in upstate New York with her beloved dog, Sadie, and several rescued cats. Jon Muth has written and illustrated many acclaimed picture books including his Caldecott Honor title, "Zen Shorts," and "The Three Questions," a "New York Times" bestseller. He lives in New York State with his wife and four children. Mark Teague has written and illustrated books including the popular "Pigsty," "Baby Tamer," and "One Halloween Night." He lives in Austerlitz, New York, with his wife and two daughters. Margarita Engle is a Cuban American poet, novelist, and journalist whose work has been published in many countries. She is the author of young adult nonfiction books and novels in verse including "The Surrender Tree," a Newbery Honor Book, "The Poet Slave of Cuba," "Hurricane Dancers," "The Firefly Letters," and "Tropical Secrets." She lives in northern California. Thacher Hurd is the author and illustrator of many books for children, including "Bongo Fishing," "Mama Don't Allow" and "Art Dog." He lives in Berkeley, California. Valerie Hobbs is the recipient of the 1999 PEN/Norma Klein Award, a biennial prize that recognizes "an emerging voice of literary merit among American writers of children's fiction." She is the author of young adult and middle-grade novels including "Sheep," "Defiance," "Anything but Ordinary," and "The Last Best Days of Summer." She holds a B.A. and an M.A. in English from the University of California at Santa Barbara, where she has taught academic writing. Valerie lives in Santa Barbara, California, with her husband. Matt de la Pena's books for young adults include "Mexican WhiteBoy," "We Were Here" and "I Will Save You." He lives in Brooklyn, New York. Pam Munoz Ryan has written over thirty books, including the award winning "Esperanza Rising," "Riding Freedom," and "The Dreamer." She lives in North Dan Diego County with her family. Wendy Orr has written more than two dozen children's books, including the Rainbow Street Shelter series, "Mokie and Bik," "Ark in the Park," and "Nim's Island." She lives with her family in Australia, near the sea. Olga and Alekesey Ivanov have illustrated the Charlotte's Web and Harry Cat and Tucker Mouse beginning readers' series for Henry Holt Books for Young Readers, as well as any others. They live in Denver, Colorado.
or
Not Currently Available for Direct Purchase
Copyright © 2020 American Booksellers Association