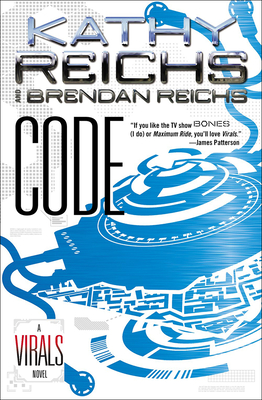 Tory and the rest of the Virals are put to the ultimate test when they find a geocache containing an ornate puzzle box. Shelton decodes the cipher inside, only to find more tantalizing clues left by "The Gamemaster." A second, greater geocache is within reach--if the Virals are up to the challenge. But the hunt takes a dark turn when Tory locates the other box--it contains a fake bomb, along with a sinister proposal from The Gamemaster. Now, the real game has begun: another bomb is out there--a real one--and the clock is ticking.

Kathy Reichs (www.kathyreichs.com), like her iconic character Dr. Temperance Brennan, is a board-certified forensic anthropologist. The creator of the Fox television hit Bones, now in its eighth season, Reichs has written fourteen books in the Temperance Brennan series, all "New York Times" bestsellers, including #1. "Code" is her third novel for young readers.

Brendan Reichs (www.brendanreichs.com) was born and raised in Charlotte, North Carolina. He graduated from Wake Forest University in 2000 and The George Washington University School of Law in 2006. After three long years working as a litigation attorney, he abandoned the trade to co-write the Virals series. He lives in Charlotte with his wife, Emily, daughter, Alice, and son, Henry. He plans to keep writing novels until they drag him from his desk.

Visit www.viralstheseries.com.
Loading...
or
Not Currently Available for Direct Purchase