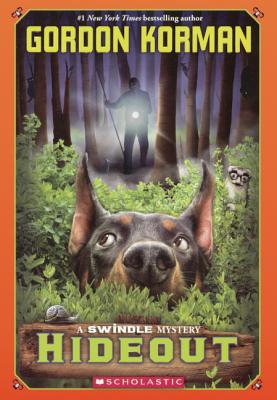 The Man With The Plan and his friends return in this fifth romp in the Swindle series
HIDEOUT: a place to escape detection, especially when being chased by someone determined to have revenge . . .
When Griffin Bing and his friends first met Luthor, he was a vicious attack dog working for the slimy S. Wendell Palomino -- also known as Swindle. The kids rescued Luthor and never thought they'd see Swindle again.
But now Swindle's returned. And he wants his dog back.
Swindle has manipulated the law so that there's no way for Savannah Drysdale to keep Luthor in her house. Before he can be taken away, the kids decide to make him disappear -- away from Swindle.
Six kids. Three hideouts. One extremely large dog.
What could possibly go wrong?

Gordon Korman is the author of THE 39 CLUES BOOK 2: ONE FALSE NOTE, which debuted at #1 on the NEW YORK TIMES bestseller list, and THE 39 CLUES BOOK 8: THE EMPEROR'S CODE. Gordon has written more than sixty books for kids and young adults, including ZOOBREAK, SWINDLE, and SON OF THE MOB, as well as the On the Run series and the Island, Everest, Dive, and Kidnapped trilogies. A native of Ontario, Canada, Korman now lives with his family in Long Island, New York.
Loading...
or
Not Currently Available for Direct Purchase