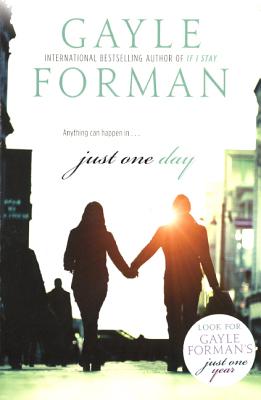 “Filled with the ups and downs of self-discovery, Forman's new book tells the story of Allyson and her uncharacteristic decision to travel to Paris for one day with Willem, whom she met during a Shakespeare performance in England. The connection between Willem and Allyson flourishes during their trip, which makes it even more shocking when the next morning Willem has disappeared. Allyson's quick return to the United States thrusts her into a year of questioning her path and discovering her interests. The story leaves you holding your breath for the follow-up novel!”
— Kerry Barmann, Kids Ink, Indianapolis, IN
View the List

Gayle Forman is an award-winning, "New York Times"--bestselling author and journalist whose articles have appeared in numerous publications, including "Seventeen," "Cosmopolitan," "The Nation," and "The New York Times Magazine." She is the author of the "New York Times "bestsellers "If I Stay "and "Where She Went," as well as "Sisters in Sanity "(HarperTeen). She lives in Brooklyn, New York with her husband and two daughters.
Loading...
or
Not Currently Available for Direct Purchase